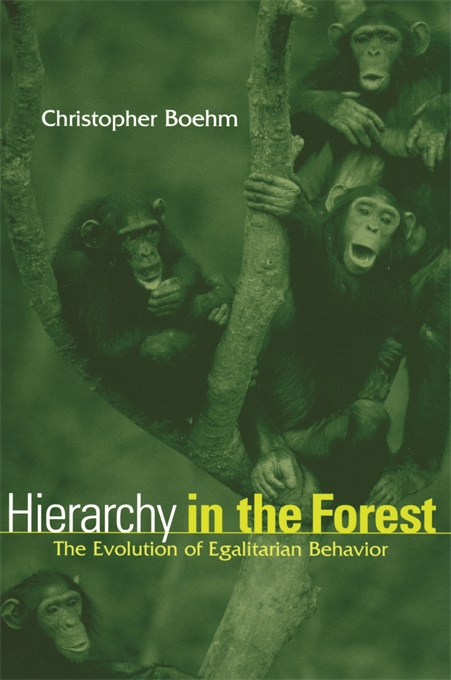 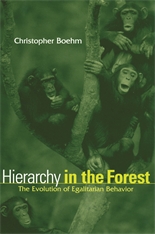 “This well-written book, geared toward an audience with background in the behavioral and evolutionary sciences but accessible to a broad readership, raises two general questions: ‘What is an egalitarian society?’ and ‘How have these societies evolved?’… [Christopher Boehm] takes the reader on a journey from the Arctic to the Americas, from Australia to Africa, in search of hunter-gatherer and tribal societies that emanate the egalitarian ethos—one that promotes generosity, altruism and sharing but forbids upstartism, aggression and egoism. Throughout this journey, Boehm tantalizes the reader with vivid anthropological accounts of ridicule, criticism, ostracism and even execution—prevalent tactics used by subordinates in egalitarian societies to level the social playing field… Hierarchy in the Forest is an interesting and thought-provoking book that is surely an important contribution to perspectives on human sociality and politics.”—Ryan Earley, American Scientist

“Hierarchy in the Forest claims new territory for biological anthropology and evolutionary biology by extending the domain of these sciences into a crucial aspect of human political and social behavior. This book will be a key document in the study of the evolutionary basis of genuine altruism.”—Primate Science

“From a theoretical perspective, some of the most convincing arguments presented by Boehm center around the pivotal role of language in the evolution of egalitarianism… More provocative, however, are Boehm’s ideas on how between-group selection has operated to generate egalitarianism.”—Harold Gouzoules, The Quarterly Review of Biology

“Combing an exhaustive ethnographic survey of human societies from groups of hunter-gatherers to contemporary residents of the Balkans with a detailed analysis of the behavioral attributes of non-human primates (chimpanzees, gorillas, bonobos), Boehm focuses on whether humans are hierarchical or egalitarian by nature… [Boehm’s hypotheses] are invariably intriguing and well documented… He raises topics of wide interest and his book should get attention.”—Publishers Weekly

“The most unique and interesting feature of this clear, well written book is the way Boehm links the study of nonhuman primates (particularly chimpanzees) to traditional concepts of political anthropology. As a political scientist, I was intrigued by Boehm’s suggestion that democracy, both ancient and modern, could be understood as the expression of the same natural dispositions that support the egalitarianism of nomadic bands and sedentary tribes. I expect that many scholars in biology, anthropology, and the social sciences would learn from this stimulating book. Even those who disagree with Boehm’s arguments are likely to be provoked in instructive ways.”—Larry Arnhart, Northern Illinois University

“Boehm has been the first to look at egalitarianism with a cold, unromantic eye. He sees it as a victory over hierarchical tendencies, which are equally marked in our species. I would predict that his insightful examination will reverberate within anthropology and the social sciences as well as among biologists interested in the evolution of social systems.”—Frans de Waal, Emory University

“Chris Boehm boldly and cogently attacks a whole orthodoxy in anthropology which sees hunter-gatherer ‘egalitarianism’ as somehow the basic form of human society. No praise can be too high for Boehm’s brilliant and courageous book.”—Robin Fox, Rutgers University

“Hierarchy in the Forest is an original and stimulating contribution to thinking about the origins of egalitarianism. I personally find Boehm’s ideas convincing, but whether one agrees with him or not, he has formulated his hypotheses in such a way that this book is likely to set the terms of the discussion for the forseeable future.”—Barbara Smuts, University of Michigan