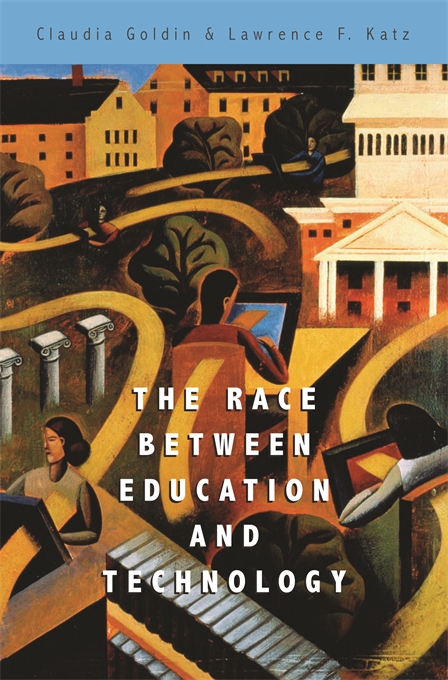 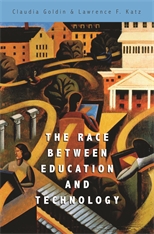 “One of the most comprehensive analyses of the spread of the American educational system throughout the 20th century.”—Eduardo Porter, New York Times

“One of the most important books of the year.”—Nicholas D. Kristof, New York Times

“This is the most important book on modern U.S. inequality to date.”—Tyler Cowen, Marginal Revolution

“[Goldin and Katz] tackle the most important U.S. economic trend, and, hence, most critical domestic issue—growing income inequality… [America] now has the most unequal income and wage distributions of any high-income nation… Goldin and Katz’s careful documentation of the changes in income distribution is an important public service. This alone would make their book essential reading. Yet they also offer a powerful explanation for what has driven changes in income inequality and point to solutions for addressing it… The good news is that if Goldin and Katz are right, the cure for income inequality is one most Americans would intuitively support: improving mass education. Mr Obama’s spin-doctors should start translating Goldin and Katz’s book into a campaign slogan at once.”—Chrystia Freeland, Financial Times

“If you want to understand the causes of the innovation deficit, I’d recommend adding one serious book to your summer reading list: The Race Between Education and Technology.”—David Leonhardt, New York Times

“Essential reading… Goldin and Katz give a broad historical view of the role of education in economic growth in the U.S. They make the case that, after a century of leading the world in supplying the educated workers needed to serve technology, the U.S. has fallen behind in education.”—Thomas F. Cooley, Forbes

“[Goldin and Katz] combine an acute sense of history with a skillful use of statistics.”—Andrew Hacker, New York Review of Books

“The Race Between Education and Technology contains many tables, a few equations and a powerfully told story about how and why the United States became the world’s richest nation—namely, thanks to its schools… Beginning in the 1970s, however, the education system failed to keep pace, resulting, Ms. Goldin and Mr. Katz contend, in a sharply unequal nation… It is nice to be reminded, in a data-rich book, that greater investments in human capital once put Americans collectively on top of the world.”—Stephen Kotkin, New York Times

“Masterful… As the book’s title suggests, whether inequality increases or not is best thought of as an ongoing race between education and technology. Combining this simple but appealing idea with a deep knowledge of the histories of the U.S. labor market and educational institutions, Goldin and Katz conclude that whereas education was winning the race for most of the 20th century, technology caught up in the 1970s and has since prevailed. The authors’ most insightful point is that the root cause of the recent growth in inequality is not faster technological progress during the past three decades but rather the surprising stagnation in the level of education of young Americans.”—Thomas Lemieux, Science

“Claudia Goldin and Lawrence Katz establish a clear link between the number of high school and college graduates produced in any modern society and its economic growth.”—Thomas D. Elias, The Appeal-Democrat [Marysville, CA]

“Claudia Goldin and Lawrence Katz have produced a definitive economic history of American education… [It’s] tightly reasoned and easy to grasp by anyone who cares about the country’s educational history.”—Peter H. Lindert, EH.net

“The general brilliance of illumination makes this book a feast of provocation.”—Trevor Butterworth, Forbes

“During the 20th century both technology and education raced forward in the U.S., generating massive economic expansion and rising standards of living. Throughout the century, technological changes increased the relative demand for skilled labor, while the rapid expansion of first high schools and then higher education simultaneously increased the relative supply of skilled labor. Goldin and Katz carefully examine the historical and economic forces behind this expansion in education, extracting crucial evidence from the remarkable Iowa State Census of 1915, and they argue very plausibly that the relative demand for skilled labor grew at a fairly constant rate over the century. They conclude that ‘education ran faster’ than technology ‘during the first half of the century,’ causing a considerable drop in economic inequality, but that ‘technology sprinted ahead of limping education in the last 30 years,’ leading to the recent upsurge in inequality. The rate of return on educational investments has become, once again, very high. Why have education levels increased so sluggishly in the face of these massive rewards? The answers are not entirely clear, nor are the optimal public policies, but the authors offer much food for thought. A must read.”—R. M. Whaples, Choice

“An impressive combination of extensive historical research, careful empirical analysis, and thoughtful commentary on one of the most important questions of the day: to what extent does increasing inequality in incomes stem from our failure to increase educational attainment?”—William G. Bowen, President Emeritus, The Andrew W. Mellon Foundation

“The Race Between Education and Technology is a most important study, both for what it teaches us about the past and also in presenting policies for the future if America is to regain its world leadership in education.”—Stanley Engerman, University of Rochester

“This book represents the best of what economics has to offer, combining a broad theoretical perspective, careful consideration of data, detailed lessons from economic history, and a close look at the present.”—Alan Krueger, Princeton University

“A masterful work by two leading economists on some of the biggest issues in economics: economic growth, human capital, and inequality. There are fundamental insights in the book, not just about our past but also our future. Rigorous but not overly technical, this beautifully written book will appeal to educated lay people and economists alike.”—Steven D. Levitt, University of Chicago, coauthor of Freakonomics

“A staggering achievement of historical research and analysis and required reading for anyone who’s tired of glib, ideologically-inspired, trendy prescriptions for how to fix America’s education system.”—Sylvia Nasar, author of A Beautiful Mind

“The Race Between Education and Technology will stand as the definitive treatment of changes in income distribution and their causes, as well as of possible countervailing policies towards rising inequality. This is empirical economic scholarship at its finest.”—Lawrence Summers, Harvard University