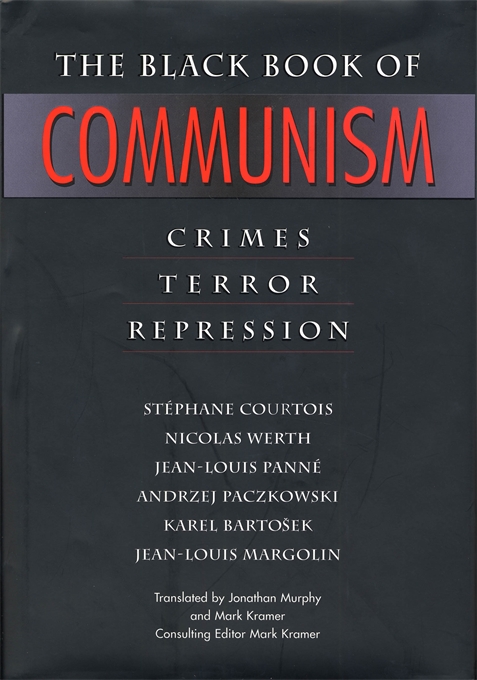 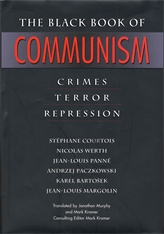 The Black Book of Communism

“An 800-page compendium of the crimes of Communist regimes worldwide, recorded and analyzed in ghastly detail by a team of scholars. The facts and figures, some of them well known, others newly confirmed in hitherto inaccessible archives, are irrefutable. The myth of the well-intentioned founders—the good czar Lenin betrayed by his evil heirs—has been laid to rest for good. No one will any longer be able to claim ignorance or uncertainty about the criminal nature of Communism, and those who had begun to forget will be forced to remember anew.”—Tony Judt, The New York Times

“When The Black Book of Communism appeared in Europe in 1997 detailing communism’s crimes, it created a furor. Scrupulously documented and soberly written by several historians, it is a masterful work. It is, in fact, a reckoning. With this translation by Jonathan Murphy and Mark Kramer, English-language readers may now see for themselves what all the commotion was about.”—Jacob Heilbrunn, The Wall Street Journal

“The Black Book of Communism, which is finally appearing in English, is an extraordinary and almost unspeakably chilling book. It is a major study that deepens our understanding of communism and poses a philosophical and political challenge that cannot be ignored. The book’s central argument, copiously documented and repeated in upwards of a dozen different essays, is that the history of communism should be read above all as the history of an all-out assault on society by a series of conspiratorial cliques led by cruel dictators (Lenin, Stalin, Mao Zedong, Kim Il Sung, Pol Pot, and dozens of imitators) who were murderously drunk on their own ideology and power… Courtois and his collaborators have performed a signal service by gathering in one volume a global history of communism’s crimes from the Soviet Union to China, from the satellite countries of Eastern Europe to Vietnam, Laos, Cambodia, and North Korea, and to a lesser degree in Latin America and Africa… The Black Book is enormously impressive and utterly convincing.”—Michael Scammell, The New Republic

“Arguing with the passion of former believers, [the contributors] charge that communism was a criminal system. They all make the case well.”—Foreign Affairs

“To the extent that the book has a literary style, it is that of the recording angel; this is the body count of a colossal, wholly failed social, economic, political and psychological experiment. It is a criminal indictment, and it rightly reads like one.”—Alan Ryan, The New York Times Book Review

“Most sensible adults are aware of communism’s human toll in the Soviet Union and elsewhere—the forced starvations in the Ukraine, the Great Purge of the 1930s, the Gulag, the insanity of China’s Great Cultural Revolution, Pol Pot’s murder of one in every seven Cambodians, Fidel Castro’s firing squads and prisons. All these horrors are now brought together in what the French scholar Martin Malia, in his foreword, calls a ‘balance sheet of our current knowledge of communism’s human costs, archivally based where possible and elsewhere drawing on the best available secondary evidence’… The book is all the more damning because each of the contributing scholars is either a former communist or close fellow traveler… That The Black Book infuriated the French left is a sure mark of its intrinsic worth.”—Joseph C. Goulden, The Washington Times

“The Black Book is a groundbreaking effort by a group of French scholars to document the human costs of Communism in the 20th century. Its publication caused a sensation in France when it was first released in 1997, but Americans were not able to see for themselves what the furor was all about until October 1999, when Harvard University Press finally released an English translation. It was worth the wait. Taking advantage of many newly available archives in former Communist states, the authors (many of them former Communists themselves) have meticulously recorded the crimes, terror and repression inflicted by Communist regimes across the world. It is a powerful work.”—Mark A. Thiessen, National Review

“The authors of The Black Book of Communism are part of a welcome change in the moral-philosophical landscape in Paris, and one hopes elsewhere, as a result of which liberal and left-of-center intellectuals, scholars and politicians judge the crimes of communist regimes with the same severity they’ve applied to those of Nazism and fascism.”—Jeffrey Herf, The Washington Post Book World

“The publishing sensation in France this winter (1999) has been an austere academic tome, Le Livre Noir du Communisme, detailing Communism’s crimes from Russia in 1917 to Afghanistan in 1989… [The Black Book of Communism] gives a balance sheet of our present knowledge of Communism’s human costs, archivally based where possible, and otherwise drawing on the best secondary works, and with due allowance for the difficulties of quantification. Yet austere though this inventory is, its cumulative impact is overwhelming. At the same time, the book advances a number of important analytical points.”—Martin Malia, The Times Literary Supplement

“This black book has been a best seller across Europe. It details all the misery inflicted by Communism throughout the world: 25 million dead in the Soviet Union, 65 million in China, 1.7 million in Cambodia… Not a pleasant book, a necessary one.”—David Sexton, The Evening Standard

“Now The Black Book of Communism is available in English, thanks to a stellar edition from Harvard University Press that appeared late last year, with an excellent introduction by Martin Malia, professor of history at the University of California, Berkeley.”—Stephen Goode, Insight

“A generally even-toned and informative book, and one that will serve as a healthy dose of medication for those still afflicted by a wish to treat the Bolshevik revolution as a mistake, however monumental, or something that ‘had to happen’… The Black Book’s guiding purpose is to cut through the dense tissue of apologetics that has been deployed in the communist interest, both those devised in the thick of repression and those added after the collapse.”—Ben Webb, New Times

“In the end, the Black Book’s body counts—necessary as they are—are less important than the soul-destroying connections between Marxist idealism and the violence committed in its name.”—Lawrence Osborne, Salon

“The heart of the Black Book is a compilation and description—in mesmerizing objective prose—of the slaughters visited upon populations around the world by communist dictators in the 20th century… The Black Book is an elegantly simple and valuable record of a time many would like to forget—but will have to deal with.”—John Omicinski, The Scottsdale Tribune

“I can’t think of any book that would be more important for Americans to read. If you are going to read only one book this year, make it The Black Book of Communism. This is an 800-page history of the terror, repression and killings of communism stretching from the Bolshevik Revolution to the present. Written by scholars who are ex-communists or former fellow travelers, the book establishes beyond doubt that communism is the greatest crime against humanity in the 20th century.”—Charley Reese, The Sentinel

“A sober and balanced piece of work. [The Black Book of Communism] is particularly good on the origins of the Soviet police state under Lenin and on Stalin’s Great Terror. It should be read by anyone who still has illusions that the Bolshevik revolution was a good thing—and anyone who believes that something worthwhile was lost when the Berliners destroyed the Wall 10 years ago.”—Paul Anderson, The Tribune

“The Black Book of Communism] consists of scholarly yet readable (and superbly translated) essays, some based on recently opened Soviet archives, and covers the communist revolutions in Europe, Asia, Africa and Latin America, including Cuba… The Black Book [is] a most important volume of contemporary history produced by a group of French Sovietologists… On finishing this magnificent volume, it is impossible not to see that in three-quarters of a century Soviet communism had left nothing behind except death and destruction.”—Arnold Beichman, Weekend Post

“A serious, scholarly history of Communist crimes in the Soviet Union, Eastern and Western Europe, China, North Korea, Cambodia, Vietnam, Africa, and Latin America… The Black Book does indeed surpass many of its predecessors in conveying the grand scale of the Communist tragedy, thanks to its authors’ extensive use of the newly opened archives of the Soviet Union and Eastern Europe.”—Anne Applebaum, The Weekly Standard

“A unique attempt by French historians—as important in its way as the works of Solzhenitsyn—to chronicle the crimes of communism wherever it has attained power in the world. Not the least remarkable thing about this book is that this is the first time such a study has been made. For the cumulative toll of victims of communist rule, estimated by the authors at between 85 and 100 million, dwarfs even the crimes of the Nazis… A devastating and important book, already hailed in Europe, and the more harrowing for its sobriety.”—Kirkus Reviews

“An important scholarly achievement of exhaustive breadth based on new archival material from the Stalin era… This impressive and important book is well worth the price.”—Zachary T. Irwin, Library Journal

“In France, this damning reckoning of communism’s worldwide legacy was a bestseller that sparked passionate arguments among intellectuals of the Left. Courtois, along with the other distinguished French and European contributors, delivers a fact-based, mostly Russia-centered wallop that will be hard to refute: town burnings, mass deportations, property seizures, family separations, mass murders, planned famines—all chillingly documented from conception to implementation.”—Publishers Weekly