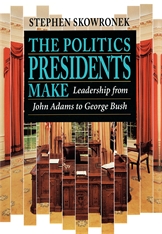 “A magisterial work, one of the most important studies of the presidency—indeed, of American politics—ever written… [Skowronek] comes very close to identifying the root problem affecting presidents… This is the all-important fact that the Constitution is unchanging and nondeveloped, while at all times intersecting with a social, economic, and political world that has undergone incessant development from the beginning. The whole work may be read as an extended, powerful, and penetrating meditation on some of the global consequences of this fact.”—Walter Dean Burnham, American Political Science Review

“In this pathbreaking work, Stephen Skowronek escapes from ‘secular time’ to view presidents in what he calls ‘political time,’ meaning incumbents’ relationships to their predecessors and to the status quo… This rich, insightful, resonant volume merits reading and rereading. It is destined to be a classic of presidential scholarship.”—Gil Troy, Journal of American History

“Skowronek…brings illuminating insights to each president that he discusses… A major theoretical contribution to the study of the presidency.”—Richard M. Pious, Political Science Quarterly

“In evaluating the field of political authority, Skowronek skillfully and systematically makes use of historical evidence. His approach can only be applauded as it brings a new and broader understanding of the historical evolution of the presidency.”—Birgitte Nielsen, American Studies in Scandinavia

“The book brings together current ideas of political scientists on the theory of presidential leadership, as well as incorporating the major historical works on the various presidents. It is history from the top rather than from the bottom, and while current historical trends are in the opposite direction, this sophisticated, scholarly analysis of presidential leadership illustrates that the history of political leadership is a subject on which innovative, imaginative approaches can still produce important new perspectives.”—Peter G. Boyle, The Americas

“Stephen Skowronek’s much awaited book relating cycles of the US presidency to what the author has previously called ‘political time’ is an instant conversation piece. The Politics Presidents Make is a book that will engage scholars of political leadership and, particularly, those of the US presidency with its categories and its arguments. It is also easy to imagine that this book will evoke theological debates.”—Bert A. Rockman, Governance

“This is a remarkable book… A skilled practitioner of the use of historical evidence systematically to understand not only the evolution, but also the current nature, of American political institutions, [Skowronek] examines the whole crowded history of the presidency to catalog and organize the two hundred year experience in a fresh and striking fashion.”—Joel Silbey, Review of Politics

“A work of great insight… This is a book that kicks aside all the conventional ways of thinking about presidential leadership and erects a daring, powerful, analytic machine that compels attention.”—Hugh Heclo, George Mason University