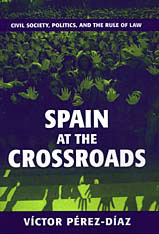 Spain at the Crossroads

Civil Society, Politics, and the Rule of Law

This book explores the trials of Spanish democracy from the death of Franco to the present. But the heart of the story is the generation that came of age in the 1960s, assumed political power, and formed the first Socialist government in 1982 with Felipe González as Prime Minister, which was returned to power in four consecutive elections. Starting in 1993, however, the government came under siege. High officials were accused of authorizing the assassination of as many as twenty-eight Basque nationalists suspected of terrorism over the years, and of covering up these crimes. This scandal, along with other disclosures of corruption and serious law-breaking, shook the country’s confidence in its legal and political institutions and in its ability to hold its leaders to the rule of law.

The author probes for the roots of these events in the character of the generation that assumed power and in the immature nature of the civil society it inherited. Facing unusually high unemployment, internal economic and social pressures, the stringent requirements for joining the European Union, and the demands of Catalan and Basque nationalists, the government lost its way and was eventually voted out of office.

Using Spain as the example, the book examines issues of governance, social change, and internal nationalist movements as they relate to the civil society and the wider polity everywhere.