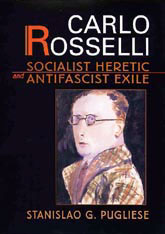 “Carlo Rosselli—one of the most courageous and interesting figures of Italian antifascism—is a rich and overdue subject for a biography… Pugliese has chosen to write a primarily intellectual biography and has done a commendable job of explaining Rosselli’s maverick position within European Socialism.”—Alexander Stille, The New York Times Book Review

“The reception that Stanislao Pugliese’s recent biography of the antifascist leader Carlo Rosselli has received makes it apparent that few doubt the subject’s importance or its potential contribution to current understanding of oppressive forces and those who resisted them during WWII. It is a biography that revives for the reader not just the few who fought openly for liberty in the fascist years of Italy, but for their leader as well… Pugliese’s numerous skills will probably be what strike most readers initially. The most evident of these skills is his capacity for detail and extensive research. The footnotes alone—which include police reports, personal letters, press conferences, and private interviews, as well as locations of foundations and archives that are crucial yet obscure to the general public—are almost varied and engaging enough to be published on their own… Pugliese’s attentive scholarship also illuminates, word by word, Rosselli’s masterful use of persuasive language.”—Ann Snodgrass, Boston Book Review

“A clearly written account of the life and times of a non-doctrinaire socialist thinker and antifascist hero…through a doctrinal miasma of Marxist orthodoxy, revisionism, and heresy, Pugliese steers with a sure hand and with a lucidity that the subject matter, so vexed and acrimonious, fails to confound. This is, indeed, a scholarly book, but one that is perfectly accessible to the general public…a wonderful exception.”—Katherine A. Powers, The Boston Sunday Globe

“By the time of his assassination in 1937, Rosselli had already set the foundations for new ways of imagining modern liberal democracies.”—Michael Bronski, The Boston Phoenix

“Stanislao Pugliese has written an outstanding intellectual biography of the political philosopher and antifascist exile Carlo Rosselli (1899–1937). It is superlative on many levels: as a chronicle of Italian leftist political thought in the 1920s and 1930s; as a portrait of a charismatic leader and the movement he founded; and as an exploration of pre–World War II antifascist resistance… this book, a Premio Silone winner, is an essential read for all those with an interest in the Italian left and antifascist movements, and admirably fills the gap in the literature in English on Rosselli… In Carlo Rosselli, Pugliese successfully traces the origins of liberal socialism, putting it within the context of the heated intellectual debates among the socialists, communists, and anarchists of the time. He quotes extensively from Rosselli’s writings and also elaborates on and explicates them. The compelling final two thirds of the book, on ‘Liberal Socialism,’ ‘Justice and Liberty’ and ‘The Tragic Hero,’ construct a clear analysis of Rosselli’s platform and his actions, and prove the most satisfying reading.”—Risa Sodi, Italian Culture

“Pugliese’s study does much to shore up a forgotten legacy: Rosselli is presented as a significant intellectual and political maverick whose vision of a ‘liberal socialism’ has much to offer today’s dispirited transatlantic left.”—Matthew Price, Lingua Franca

“Except for experts in European history, most Americans are no doubt unfamiliar with Carlo Rosselli. This is too bad. For in our age of pseudo-celebrities and worthies famous for being famous, it’s salutary to be reminded that real heroes once existed, that they once gave up their lives for great causes… [Pugliese’s] account of the Italian scholar and activist martyred by Mussolini’s fascist regime is the first biography to appear in English [and is] a welcome addition to our biographical literature.”—Dan Cryer, Newsday

“A scholarly biography of the prominent Italian antifascist intellectual, writer, and activist who was stabbed to death by political assassins in 1937… Pugliese brings to this admiring portrait a formidable variety of tools, including a thorough knowledge of Italian history, language, literature, and landscape… [His] research is impeccable.”—Kirkus Reviews

“Pugliese does an excellent job of showing how Rosselli took his responsibility as a public intellectual seriously… He saw fascism as a moral sickness threatening all classes, and he aligned himself with the working class without ever romanticizing it. Pugliese provides a lucid account of political events, ideological disputes and clandestine resistance and brings the context of Rosselli’s thinking to life.”—Publishers Weekly

“This largely biographical account of the liberal socialism of Carlo Rosselli reads with the animation of a good detective story and yet is strong as scholarship. Rosselli’s life, here presented in a vivid, spirited, and highly accessible narrative, makes for captivating reading, and his political activity is clearly and accurately described.”—Walter L. Adamson, author of Avant-Garde Florence: From Modernism to Fascism

“Thank you for your book which I found interesting to read. I particularly appreciate the sober style with which you have traced Carlo Rosselli’s noble political and human portrait, underlining his extreme refusal to bend to the ideological premises of a regime, and his rejection of its moral and intellectual baseness.”—Carlo Azeglio Ciampi, President of Italy

“Professor Pugliese’s carefully researched and objective book is a fine contribution to our understanding of the life and thought of Carlo Rosselli, the brilliant Italian anti-Fascist who founded the ‘Justice and Liberty’ liberal-socialist movement and courageously fought Mussolini’s regime at home and abroad until his brutal assassination during the Spanish Civil War.”—Charles F. Delzell, author of Mussolini’s Enemies: The Italian Anti-Fascist Resistance

“Carlo Rosselli is excellent scholarship on an important subject, handled with discerning intelligence and balanced, reflective judgment, and written in crisp, tight prose.”—John Patrick Diggins, author of Mussolini and Fascism: The View from America

“An extremely important book…doesn’t surrender to the seductions of the time and the falsifications that followed.”—Antonio Negri, coauthor of Empire