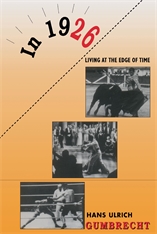 Living on the Edge of Time

“[Gumbrecht] approaches the culture of the early twentieth century in an…ingenious and intriguing way in his In 1926. What interests him, he says, is to what extent a year, a simple, purely conventional unit of time, can be constituted as an object of historical inquiry—not, however, with the purpose of isolating that year’s essence or significance, but rather simply by way of getting some inkling of what it was like to be alive at the time.”—Edwin Frank, Boston Review

“Written almost entirely in the present tense, and zooming cinematically from a lone woman swimming the English Channel to roof gardens in Manhattan, the book attempts to re-create the feeling of ‘being-in-1926,’ to borrow the author’s Heideggerian formulation. The entries are a droll pastiche of literary criticism, sociological statistics, and historical anecdotes.”—Adam Shatz, Lingua Franca

“In the year 1926, no presidents were elected or assassinated, no wars began or ended, and no titans strode across the world stage. But beneath the year’s deceptive quiet, a turbulent new world was aborning, its gestation signaled by the tortured fiction of Kafka, the ontological ponderings of Heidegger, the labyrinthine wanderings of Borges, the comedic paths of Chaplin, the daring theorizing of Freud, and he fevered rhetoric of Hitler. Gumbrecht invites us to experience this year in a book that discards the conventions of linear narrative in favor of a series of 51 essays interconnected by numerous cross-references. Acting as the literary equivalent of Web surfing, the innovative structure perfectly reflects the increasingly kinetic and fragmented culture of the time, when the inherited certainties of faith and tradition were giving way to volatile mass enthusiasms in sports and cinema and to unsettling experiments in technology, music, and gender roles. In both content and form, this work is an important advance in cultural scholarship.”—Bryce Christensen, Booklist