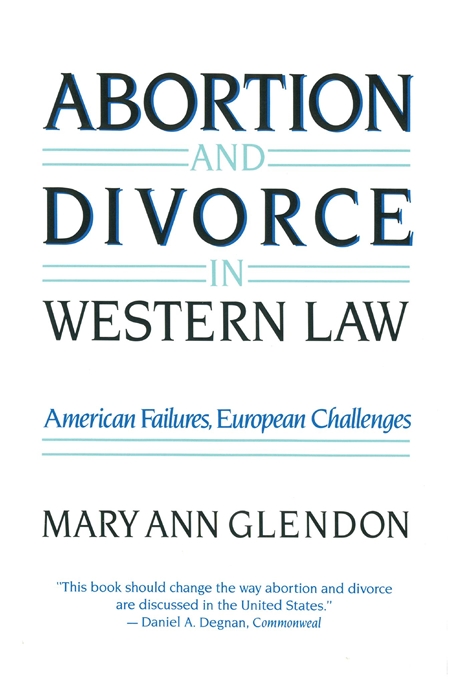 Abortion and Divorce in Western Law

“This book should change the way abortion and divorce are discussed in the United States.”—Daniel A. Degnan, Commonweal

“Ms. Glendon is an intelligent and humane scholar, and her argument is mounted with admirable incisiveness.”—Paul Robinson, The New York Times Book Review

“[An] extraordinary study… The courageous goal of Mary Ann Glendon’s book is precisely to try to resurrect the idea of law as educational… [Ours is] a nation bitterly engaged in a fight over abortion and over a divorce law that imposes hardship on the very parties that looked to it as an engine of liberty. Abortion and Divorce in Western Law, a serious and compassionate book, shows us that another way is both possible and eminently sensible.”—Daniel Casse, Commentary

“Brilliant… [Glendon’s] application of Clifford Geertz’s notion that law is a ‘culture system,’ a ‘story’ by which society interprets itself is nothing short of dazzling. The ‘story’ Professor Glendon tells is a chilling one: society stumbles unintentionally towards atomization and nihilism.”—Andrew M. Greeley

“This book is dynamite. It blows to bits the often-heard contention that compromise on abortion policy is impossible in a divided society… The argument of this book is graceful, elegant, and persuasive. One reason for its persuasiveness is the author’s sympathy for the commitments and concerns of both sides of the abortion controversy. She appeals to their deepest convictions…to show that somewhere between the extreme positions of abortion on demand and no abortion at all a sensible and sensitive policy favored by most Americans is to be found.”—Donald P. Kommers