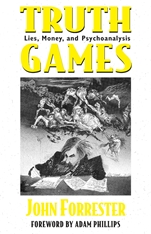 “The first section of this elegant book examines the relation of truth-telling to lying, moving from Augustine to Proust, from Nietzsche to Ibsen, from the placebo effect in medicine to theories of truth in formal logic… The second part of the book contains a detailed study of Freud’s case history of the Ratman, and Lacan’s commentary on that case, focusing on the theme of debt… John Forrester’s subtle and thought-provoking book opens up the space for thinking about [many] questions.”—Darian Leader, The Guardian

“[Forrester] combines the stance of the Lacanian professional with that of the professional historian and leavens them both with the relaxed prose of the English man of letters… Truth Games is the odd but largely happy result of 20 years’ research designed to produce an inquiry into two questions: whether psychoanalysis can really uncover a truth about the self; and whether one can speak with any imagination about the currency that secures the bond between analyst and patient, the bond—let us be frank about it, Forrester says—of money.”—Perry Meisel, The New York Times Book Review

“[Forrester’s] scholarly approach directs attention to the subtle consensi which generate the ambitions of the psychoanalytic enterprise in its bid for accountability… This work is both historically precise and far-reaching in moral disposition, since in challenging a notional ‘exchange of truth’ Forrester raises larger issues than those commonly exercised in relation to analysts’ discussion of codes of practice.”—Tessa Adams, British Journal of Psychotherapy

“Forrester is a Cambridge historian of science who specialises in the post-Freudian phenomenon of professional psychoanalysis… From [his] subtitle, ‘Lies, Money and Psychoanalysis’ you might guess that he brings a sceptical mind to the phenomenon. The basis of Freud’s method was to put the ‘patient’ on a couch and get that individual talking so freely that his or her subconscious rose to the surface. The subconscious was the residence of true personality, of truth itself. But what if the person on the couch starts telling lies? …Forrester’s exploration of this delicate game is not for beginners, but that is not to say that it is unduly abstruse. Just his brief section on our facility for fibbing is enlightening (‘I was brought up in a clergyman’s household’, he quotes Sybil Thorndike, ‘so I am a first-class liar’). Wide-ranging in reference, and elegantly turned, his book refrains from outright polemic.”—Nigel Spivey, Business Weekly

“Nuanced in its handling of the ambiguities and tensions in Freud’s work…Truth Games beings with an erudite and wide-ranging essay on the social and moral place of lying in Western philosophy… [Forrester] makes numerous insightful comments regarding the subtle lies required of behavioral research, the placebo effect and suggestion, twentieth-century scientism, the impossibility of a normative science of the subject, and the approach of some contemporary psychoanalysts to patients who consciously lie.”—George J. Makari, Journal of the History of the Behavioral Sciences

“Two long, very intricate essays: one on the implications of both the inescapability of lying in life and its centrality in psychoanalysis; the other on the nature of money—or better, of obligation and indebtedness. Forrester…is often masterful in…his philosophical and psychoanalytic exploration of lying… [He] is scintillating for those who can follow him through what British psychoanalyst Adam Phillips, in his foreword, calls ‘two linked intellectual novellas, a Bildungsroman of ideas.’”—Kirkus Reviews

“A linguistic and philosophical tour de force through recent (and some ancient) history, ending with an analysis of Lacan and Freud through the latter’s ‘Rat Man’ case, this intellectually demanding work will reward readers who want to understand, for example, why penis is to phallus as gold is to money.”—E. James Lieberman, Library Journal

“The importance of lying and the need for us all to lie lies, so to speak, at the very heart of psychoanalysis. John Forrester addresses this issue in Truth Games, which is as much about philosophy and sociology as it is about psychiatry.”—New Scientist

“Forrester mounts an exuberant and provocative defense of lying… [This] exploration of lying and deception in disciplines ranging from anthropology and psychological experiments to medicine is stimulating and suggestive.”—Margret Schaefer, Ph.D., Psychoanalytic Books

“Historian and philosopher of psychoanalysis John Forrester is intent upon convincing us that truth, particularly in out present ‘age of scientism’ is overrated as a standard for scientific inquiry, as a goal of social relations, and thus, a fortiori, as a stick upon which to prop psychoanalysis or with which to beat it down. Such a proposition would be scandalous were Forrester not so clever, engaging and thorough in proving it… Against the implicit Western cultural bias for truth over falsehood, Forrester cunningly delights in drawing out the creative power of the lie.”—Renée Kingcaid, Psychoanalytic Studies [UK]