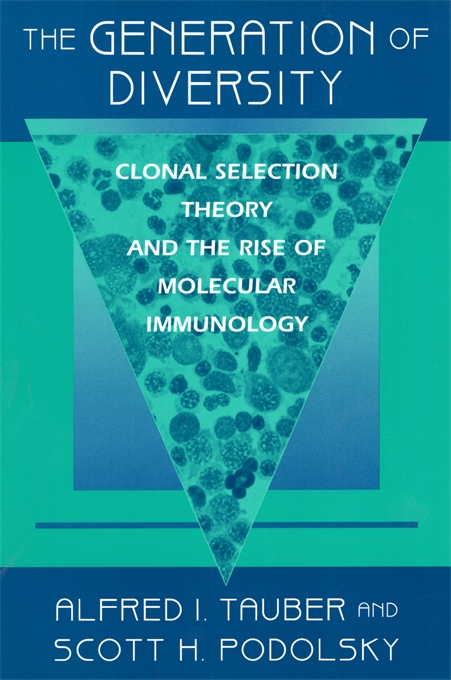 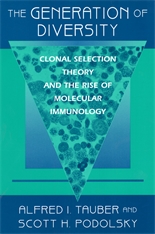 The Generation of Diversity

Clonal Selection Theory and the Rise of Molecular Immunology

“Scott Podolsky and Alfred Tauber have written a dense and exhaustive scholarly treatise about the history of [the generation of diversity]. They explore the intellectual setting in which the Tonegawa experiment was performed by reviewing original literature and interviewing the major actors in the drama… Everyone interested in the history of immunology and genetics should read this book.”—Fred S. Rosen, Nature

“The Generation of Diversity is a remarkable mixture of formal history, literature review, and ‘immunophilosophy.’ It traces the origins of Burnet’s clonal selection theory as a central paradigm of contemporary immunology, then reconciles that theory with the discoveries of the molecular era, and concludes with consideration of ‘the immune self’… The authors’ meticulously detailed background to the experimental work is a tour de force, which one would never expect to be attempted again, and it stands as a vibrant testament to an extraordinary era for immunology.”—Ian R. Mackay, Science

“This book is thoroughly researched, well written, and obviously intended to be definitive with respect to clonal selection and the generation of antibody diversity… Despite, or perhaps because of, the great amount of detail in this book, I enjoyed reading it… For an immunologist, it is satisfying to have the history of two major areas of research recapitulated. This book includes many details I missed earlier or had forgotten, and it is of interest to compare the authors’ assignment of priorities for correct conclusions with those of the principals, as expresses in their own reviews of the topic. This book will be an essential part of the collection of anyone with an interest in the history of immunology.”—Alfred Nisonoff, The New England Journal of Medicine

“This scholarly historiography is a must for those with more than a passing interest in immunology. Nine well-structured chapters cover the issues that have led to a general acceptance of the clonal selection theory and the establishment of molecular immunology as the arbiter of current thinking… Scott Podolsky and Alfred Tauber’s conceptual grasp of the ideas is anchored by a thorough explanation of critical experiments. They bring an almost extravagant degree of research, and attention to every argument, rendering the finished product as readable as a good novel.”—Richard Lake, The Times Higher Education Supplement

“Several recent studies have shown the central role of techniques, instruments, reagents and experimental systems in the ‘molecularization of biology and medicine’, first by focusing on the structure of proteins, then on the structure of nucleic acids (DNA and RNA). The Generation of Diversity is a fascinating account of how exactly this change took place in immunology. The book’s main strength [is] telling a very detailed story of a transformation of a single domain of scientific inquiry.”—Ilana Löwy, Medical History [UK]

“A balanced and lucid conceptual history of postwar immunology, documenting one of its most fundamental transformations. This is an important and original contribution to the history of twentieth century biology.”—Angela Creager, Princeton University