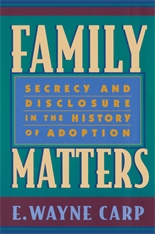 Secrecy and Disclosure in the History of Adoption

Adoption is a hot topic—played out in the news and on TV talk shows, in advice columns and tell-all tales—but for the 25 million Americans who are members of the adoption triad of adoptees, adoptive parents, and birth parents, the true story of adoption has not been told until now. Family Matters cuts through the sealed records, changing policies, and conflicting agendas that have obscured the history of adoption in America and reveals how the practice and attitudes about it have evolved from colonial days to the present.

Amid recent controversies over sealed adoption records and open adoption, it is ever more apparent that secrecy and disclosure are the defining issues in American adoptions—and these are also the central concerns of E. Wayne Carp’s book. Mining a vast range of sources (including for the first time confidential case records of a twentieth-century adoption agency), Carp makes a startling discovery: openness, not secrecy, has been the norm in adoption for most of our history; sealed records were a post-World War II aberration, resulting from the convergence of several unusual cultural, demographic, and social trends.

Pursuing this idea, Family Matters offers surprising insights into various notions that have affected the course of adoption, among them Americans’ complex feelings about biological kinship versus socially constructed families; the stigma of adoption, used at times to promote both openness and secrecy; and, finally, suspect psychoanalytic concepts, such as “genealogical bewilderment,” and bogus medical terms, such as “adopted child syndrome,” that paint all parties to adoption as psychologically damaged.

With an unswerving gaze and incisive analysis, Carp brings clarity to a subject often muddled by extreme emotions and competing agendas. His book is essential reading for adoptees and their adoptive and biological families, and for the countless others who follow their fortunes.