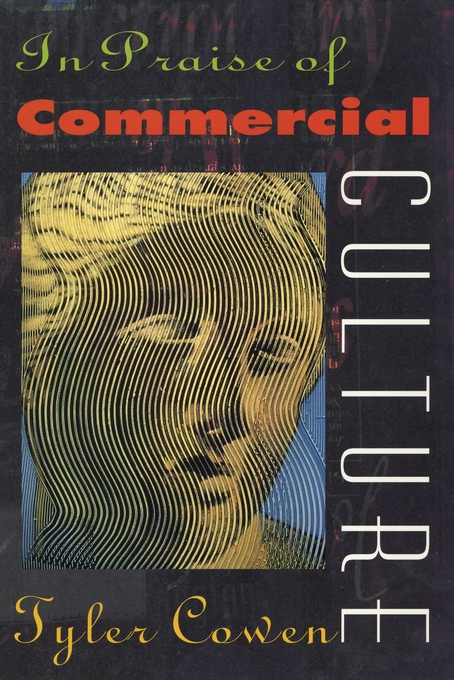 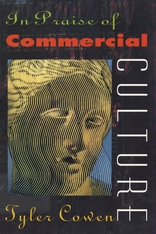 In Praise of Commercial Culture

“Unlike critics…who laud the free market but have suspicions about the pop culture it spawns, or critics…who love pop culture’s vibrancy but disdain capitalist markets, Mr. Cowen thinks that American-style commerce and culture come awfully close to representing the best of all possible worlds… Key to his argument is the notion that cultural markets are not zero-sum. Even if the markets are serving up pabulum to the masses, that doesn’t prevent Mario Vargas Llosa or Salman Rushdie from reaching an audience. The relevant question isn’t how many more books Tom Clancy sells than Rushdie, Mr. Cowen insists, but whether serious novelists can reach the audiences that are hungry for them. In other words, the efficient distribution of books at every level of taste is the sign of the healthiest kind of market… Mr. Cowen also takes issue with the ‘winner-take-all’ theory of cultural markets…[which] suggests that cultural markets favor lowest-common-denominator blockbusters…and that more artistic works get shunted aside as studios and publishers seek the next giant payday. Mr. Cowen’s response is that trite best sellers may generate more cultural noise than smaller works, but that if you cut through the noise, smaller works are still thriving.”—Christopher Shea, The Chronicle of Higher Education

“I have been doused by cold water, and by an economist at that. In Praise of Commercial Culture proclaims that a thriving capitalist society sustains the arts better than any other form of social organisation… As with the debate in the US over the National Endowment for the Arts, the row over Britain’s Arts Council never goes away. The belief is that high culture would fade away if state subsidies were withdrawn. We are unwilling to place our cultural bets on the finer impulses of the super-rich. We prefer, irrationally to leave it to officials to decide who is worthy. Creative capitalism does it better.”—Joe Rogaly, Financial Times

“A masterful performance… Cowen has provided a marvelously exuberant counterblast to the wide-spread view that in our philistine, materialist world the arts are going to hell in a handbasket. They are not. They are alive and well, and thriving as never before. Cowen goes a long way towards explaining why. For anyone with any interest in the history, funding and encouragement of the arts, In Praise of Commercial Culture is not to be missed.”—Winston Fletcher, The Times Higher Education Supplement

“In a wide-ranging, brilliant, and thought-provoking book, Tyler Cowen has come to the cultural defense of capitalism. He argues that the record of free markets in supporting culture can stand comparison with that of any other system, from feudalism to communism… Cowen is amazingly learned, both in scholarship about the arts and in the arts themselves. He moves effortlessly from painting to music to literature. He also navigates skillfully between high and low culture, whether he is comparing the great piano virtuoso Franz Liszt to a contemporary stage performer like Prince, or showing how the second part of Don Quixote follows the same logic as do movie sequels like The Empire Strikes Back or Terminator 2… This is a very important and original book.”—Paul Cantor, The American Enterprise

“[Tyler Cowen] argues that market forces stimulate the production of culture, high and low, and that far from homogenizing taste, they tend to produce art that is more specialized and diverse than it would be otherwise. In three especially lively chapters, Cowen traces the markets for the written word (where the printing press has been around for centuries), music (where recording technology became available only relatively recently), and painting (where reproductive technology counts for much less)… The picture of the art markets that emerges from In Praise of Commercial Culture is a reassuring one… It is less possible than ever before to create the monopoly on commercial culture that is the objective of totalitarian states. Within wide bands of fad and fashion, people are going to decide for themselves what they like.”—David Warsh, The Boston Sunday Globe

“[Cowen] argues persuasively that literature, Western art, and music ‘from Bach to the Beatles’ flourish best when businesses are profitable and opportunities for innovative artists to find customers are multiplied… As with the debate in the US over the National Endowment for the Arts, the row over Britain’s Arts Council never goes away. The belief is that high culture would fade away if state subsidies were withdrawn. We are unwilling to place our cultural bets on the finer impulses of the super-rich. We prefer, irrationally, to leave it to officials to decide who is worthy. Creative capitalism does it better.”—Joe Rogaly, Financial Review [Australia]

“By writing In Praise of Commercial Culture, Tyler Cowen gives his readers a clearly reasoned argument for cultural optimism, and, in the process, gives individuals…confidence to substantively critique Americans’ tendency toward grossly underestimating the quality of our artistic output in the latter half of the twentieth century.”—Craig Farmer, Fodder, The Newsletter of the Hungry Mind Bookstore

“Capitalism is better than an other ‘ism’ at delivering the goods—food, cars, shoes, and the other materials of everyday life. But few people associate capitalism with culture. In fact, many see the two as antithetical. Tyler Cowen, an art-loving economist, disagrees. Far from hurting culture, Cowen argues that capitalism nurtures it. Precisely because capitalism delivers the goods, Cowen writes, people have the means to buy books, paintings, and other forms of art. Improvements in production and marketing, for example, as well as increased wealth, have made books available to the masses. In 1760 a common laborer has to work two days to earn enough money to buy a cheap schoolbook; today the cost of a paperback is slightly more than the hourly minimum wage.”—David R. Henderson, Fortune

“The view that art should sup with commerce only with the help of a very long spoon is the extension of a popular view of artistic endeavor—that the best artists, musicians and writers are outsiders, pushed by poverty, ill-health or an oppressive state to create… Mr. Cowen won’t have a bar of such pessimism. He argues that the best artists have mostly been in the thick of life…writing, painting or composing to the dictates of the market. Commercialisation, in fact, is just what art needs and Adam Smith was right: prose and poetry flow naturally from the growth of prosperity… Moreover, wealth and financial security give artists scope to reject societal values; a large market lowers the cost of creative pursuits and makes market niches easier to find; increasing wealth means better and longer life expectancy, which helps artists realise their potential.”—Graham Adams, New Zealand National Business Review

“Cowen has given us a breath of fresh air in these so-called ‘culture wars’… [His] outstanding arguments and penetrating diagnosis convince me that observers from left to right are on the wrong track with ‘cultural pessimism’… I cannot recommend the book more highly. It should be read as a reasoned account of how culture develops and progresses in an atmosphere of personal freedom and market capitalism. More importantly, perhaps, Cowen’s book casts some much-needed light on the enemies of that vital process.”—Public Choice

“In Praise of Commercial Culture is a profoundly important book: In a historical moment when even socialists grant the efficiency and efficacy of markets in delivering a dizzying array of goods and services to people (and an increasing number of conservatives lament the same), there is still a great deal of resistance to applying a similar analysis to the production and consumption of culture… Cowen’s book is a seminal effort toward understanding that cultural matters, like other forms of human activity, benefit greatly from the decentralization, innovation, and feedback mechanisms endemic to market orders. In Praise of Commercial Culture is rich in nuance yet highly accessible to the general reader… By contextualizing pessimism within a larger dynamic of cultural growth and by showing the beneficial effects of markets on art, In Praise of Commercial Culture remaps the debate in a way that should greatly inform all future arguments.”—Nick Gillespie, Reason

“Penetrating… Cowen calmly and carefully argues that a market economy—in other words, modern capitalism, attentive above all to supply and demand—is the single best guarantor of vigorous culture… What makes In Praise of Commercial Culture such a pleasure to read is partly Cowen’s humility—he writes softly—and partly the care and acuity with which he draws out his argument… Cowen’s real intelligence—the depth of thought that makes this such an interesting book—shows itself when he [notes]: ‘Governments often support creativity most effectively by providing a large number of jobs where individuals are not expected to work very hard’… [This is a] fascinating book.”—Bruce Serafin, The Vancouver Sun

“Jesse Helms and Karen Finley: Take note of Tyler Cowen. The George Mason University economist is an avid arts warrior, but one who rises above the reactionary postures that have come to define the debate over arts funding… [His] new book, In Praise of Commercial Culture, argues that free markets, unbridled by government, produce the best environments for creative expression… ‘Ninety percent of what is released is usually junk,’ he observes, ‘but junk is just a symptom of the riches we enjoy.’”—Louis Jacobson, Washington City Paper

“This book is such a delight that it’s hard to believe it was written by an economist. It exudes such common sense (another unbelievability where economists are concerned) that, even when it fails to persuade entirely, the lapses invite dialogue, not dismissal… [This book] is neither an Ayn Randian paean to ‘The Artist as Businessman’ nor a dry economic analysis in which ‘cultural production’ becomes one more abstract input to the GDP. Mr. Cowen combines economic perspective with the skills of a cultural historian and the aesthetic sensibilities of a writer who cherishes his own cultural experiences.”—Philip Gold, The Washington Times

“Economist Tyler Cowen has a contrarian message: Pop is good. His book In Praise of Commercial Culture outlines his case for cultural optimism. The progress of democratic capitalism, he says, gives people time and affluence to make and enjoy culture… Mr. Cowen is best when he skewers the popular notion that great artists are poor bohemians who live on the margins of society.”—World

“In Praise of Commercial Culture is a lively and well-informed defense of the values of an unsubsidized free market for artists… I learned more from this book than from so many others that argue the standard view. As a bonus, the book is a pleasure to read.”—Mark Blaug, author of Economic Theory in Retrospect and The Methodology of Economics

“At a time when critics on both the left and the right decry the degradation of the arts and call for censorship, we need reminding that the very market processes responsible for offensive art have fueled unprecedented artistic diversity, generated technologies to preserve masterpieces, and brought to the masses arts that were once just privileges of the rich. Drawing on vast literatures and using delightfully parsimonious arguments, Tyler Cowen rises to the challenge. Balanced and sensible, yet also provocative and entertaining throughout, In Praise of Commercial Culture will give pause to anyone who thinks that the golden age of the arts has passed.”—Timur Kuran, author of Private Truths, Public Lies: The Social Consequences of Preference Falsification

“This book is full of surprises. It not only informed me wonderfully, it changed my mind. The subject is irresistible, and the analysis, solidly based in history, is compelling. After you enjoy reading it, you can enjoy telling your friends about it.”—Thomas C. Schelling, author of The Strategy of Conflict, Micromotives and Macrobehavior, and Choice and Consequence