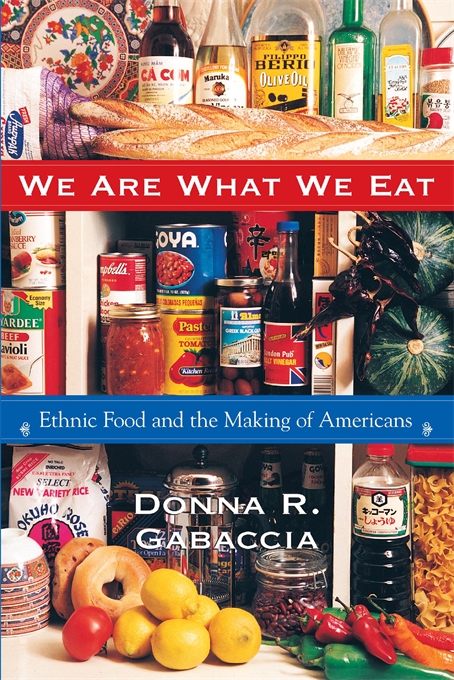 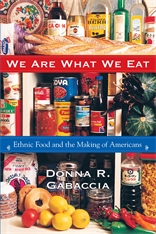 We Are What We Eat

Ethnic Food and the Making of Americans

“Today’s multiethnic American diet offers intriguing insight into the character of the nation, the subject of Donna Gabaccia’s We Are What We Eat… Rigorously annotated and dense with detail, Gabaccia’s writing nevertheless evokes knee-buckled puritans and buckskin-clad settlers, sunbonnets and babushkas, and the clamor of street markets at the turn of the century. Drawing from early American cookbooks and immigrant journals, Gabaccia unravels the nation’s earliest ‘regional creoles,’ dishes combining cultivated ingredients with indigenous plants, game and seafood, enriched by the foodstuffs of Native American traders… Gabaccia explores the journey of these ethnic foods from pushcarts to the national marketplace and how—despite the homogenizing effects of industrialized canning, milling and meatpacking—ethnic cuisines have retained their essential and often ritualized role in American life.”—Linda Temple, USA Today

“Donna Gabaccia…has assembled an impressive piece of research and writing about [eating]. We Are What We Eat…takes the immigrant metaphor of America—whether it be a melting pot or a tossed salad—and brings it to the dinner table… It’s a fascinating trip through everything from the history of Fritos corn chips to the wild rice traditions of American Indians in Minnesota to the rise of ethnic grocery chains in New York City… She sees the popularity of ethnic food as nothing less than a chance to bring together disparate folk—and create a nation of eaters who, through their dining experiences, manage to get along.”—Ted Anthony, Associated Press

“[A] fascinating guided tour of American foodstuffs… Gabaccia pursues the oscillations of 20th-century taste from the bland mass-market fare of Middle America to the revived interest in ethnic cuisine, particularly in phosphorically powerful pepper sauces. Stressing the ‘extraordinary diversity’ which runs in tandem with ‘homogeneous, processed, mass-produced foods,’ she insists that America is ‘not a multi-ethnic nation, but a nation of multi-ethnics.’”—Christopher Hirst, The Independent

“Plenty of thought-provoking and probably little-known details are presented along the way [in We Are What We Eat]… Gabaccia has a lightness of style, but this should not beguile readers into thinking that this is just a pleasing story-book with vivid illustrations. It is a skillfully written professional history imbued with a social anthropological sensibility. I wish that more British social anthropologists (and sociologists) in this field would trouble themselves to return the compliment by paying such diligent attention to social history. Gabaccia not only embraces the anthropological insight that human beings bestow meaning on food, making it not just good to eat but also good to communicate with, but goes on to grasp the other side of the anthropological debate, which requires detailed analysis of the material and economic circumstances that bring people and food together to allow communicative meanings to be created. But more than this, Gabaccia recognizes that understanding eating habits requires not just one but several histories: of recurring human migrations, of agriculture, of (big) business and of consumption. This intellectual attitude and methodological grip on the study of food and eating is the book’s great strength.”—Anne Murcott, Nature

“In this academic, yet readable—even entertaining—work, Ms. Gabaccia explores how ethnicity has influenced American eating habits… She answers why every town in America ended up with a Chinese restaurant, how sacred Italian pasta morphed into Spaghetti-Os and why burritos are filled with everything from beans to bok choy… We Are What We Eat is a unique approach to this country’s melting pot, and demonstrates the multicultural side of all Americans.”—Forward

“Donna R. Gabaccia serves up an intriguing appetizer on the growing menu of food history… The book raises intriguing and important questions regarding the cultural meaning of food and the significance of foodways in social change.”—Susan Levine, Journal of American History

“How did enclaves of immigrants obtain the foods to which they were accustomed in their new homes in America? How did pasta, tacos, and bagels move from ethnic fare to popular American foods? These are the types of questions Gabaccia addresses in this well-researched and thoroughly documented volume. Through case studies and anecdotal records she traces the way immigrant groups, from Colonial times to the present, maintained their culinary identity in spite of efforts to Americanize them. Concurrently, entrepreneurs succeeded in mainstreaming many of these same ethnic foods into American households and culture. Gabaccia concludes that we are ‘not a multi-ethnic nation, but a nation of multi-ethnics.’”—Sherry Feintuch, Library Journal