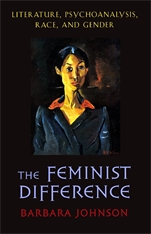 Embattled and belittled, demonized and deemed passé, feminism today seems becalmed without being calm. This is as true in literary criticism as elsewhere in the culture—yet it is in literary criticism that these essays locate the renewed promises, possibilities, and applications of feminist thought. In fresh readings of a wide array of texts—legal, literary, cinematic, philosophical, and psychoanalytical—renowned literary theorist Barbara Johnson demonstrates that the conflicts and uncertainties that beset feminism are signs not of a dead end, but of a creative turning point.

Employing surprising juxtapositions, The Feminist Difference looks at fiction by black writers from a feminist/psychoanalytic perspective; at poetry from Phillis Wheatley to Baudelaire and Marceline Desbordes-Valmore; and at feminism and law, particularly in the work of Patricia Williams and the late Mary Joe Frug. Toni Morrison and Sigmund Freud, John Keats and Jane Campion, Charlotte Perkins Gilman and Nathaniel Hawthorne, Nella Larson and Heinz Kohut are among the many occasions for Johnson’s rich, stimulating, unfailingly close reading of moments at which feminism seems to founder in its own contradictions—moments that reemerge here as sources of a revitalized critical awareness.

In the final analysis, Johnson argues, literature is essential for feminism because it is the place where impasses can be kept and opened for examination, where questions can be guarded and not forced into a premature validation of the available paradigms. In her book literature appears not as a predetermined set of works but as a mode of cultural work, the work of making readable those impossible and necessary things that cannot yet be spoken.