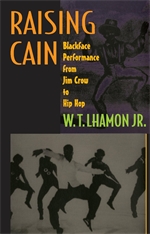 Cain made the first blackface turn, blackface minstrels liked to say of the first man forced to wander the world acting out his low place in life. It wasn’t the “approved” reading, but then, blackface wasn’t the “approved” culture either—yet somehow we’re still dancing to its renegade tune. The story of an insubordinate, rebellious, truly popular culture stretching from Jim Crow to hip hop is told for the first time in Raising Cain, a provocative look at how the outcasts of official culture have made their own place in the world.

Unearthing a wealth of long-buried plays and songs, rethinking materials often deemed too troubling or lowly to handle, and overturning cherished ideas about classics from Uncle Tom’s Cabin to Benito Cereno to The Jazz Singer, W. T. Lhamon Jr. sets out a startlingly original history of blackface as a cultural ritual that, for all its racist elements, was ultimately liberating. He shows that early blackface, dating back to the 1830s, put forward an interpretation of blackness as that which endured a commonly felt scorn and often outwitted it. To follow the subsequent turns taken by the many forms of blackface is to pursue the way modern social shifts produce and disperse culture. Raising Cain follows these forms as they prolong and adapt folk performance and popular rites for industrial commerce, then project themselves into the rougher modes of postmodern life through such heirs of blackface as stand-up comedy, rock ’n’ roll, talk TV, and hip hop.

Formally raising Cain in its myriad variants, blackface appears here as a racial project more radical even than abolitionism. Lhamon’s account of its provenance and persistence is a major reinterpretation of American culture.