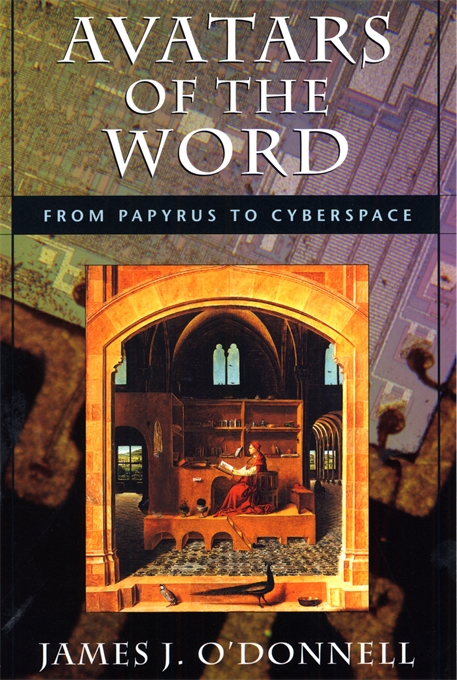 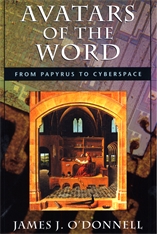 Avatars of the Word

From Papyrus to Cyberspace

“It is the contention of James J. O’Donnell in his stimulating and well-written Avatars of the Word that the electronic era does not mean the demise of face-to-face education but its strengthening… ‘My purpose in writing this book,’ he states, ‘has been to make it clearer what is happening or what might happen by thinking about similar transformations in the past.’ Thus his first five chapters suggest ways of thinking about our own times from the standpoint of Latin late antiquity… Institutions still in place today were established then—churches, law courts, schoolrooms and libraries. The transition from oral to written culture took place and O’Donnell’s meditations on the creation of print culture…are lucid, informative, and engrossing. His final four chapters, however, which analyze the humanities vis-a-vis the electronic media and focus on rethinking the modern university, give the book its true originality. ‘What happens to higher education when every student has a link to a flood of words and images, metastasizing in every imaginable way from around the world, and when every teacher and every student can reach out to each other at all hours of the day and night?’ No one knows yet, but O’Donnell’s thoughts on the subject are never less than provocative.”—Robert Taylor, The Boston Globe

“This splendid bound codex is required reading for all the dummkopf literary Cassandras who claim that the Internet will put the book out of business. Nevertheless, O’Donnell thinks there is some kind of information-technology revolution going on, and as both [a] professor of classics and vice-provost for information systems, he is happily placed to write a deeply cultured analysis of what it all means and to draw intriguing historical parallels.”—The Guardian

“Much of what makes this book useful as a guide to the future is the ways in which O’Donnell challenges us to reconsider the past. Previous ‘new’ media arrivals have tended to supplement rather than supplant their predecessors. The tendency has been to consider the march of progress (from papyrus roll to codex manuscript to printed book) as a serial relay from one technology to the next, an oversimplification that equates the rise of the Internet with the fall of the book. In reality, each time a new medium appears there follows a period of coexistence in which a culture’s overall dialogue is broadened. O’Donnell suggests today’s new media are on the verge of offering their own benefits. Particularly for humanists, the author envisions the Web’s hypermedia doing a better job than books at revealing complex truths. He proposes a new mode of scholarship in which the single-author, linear-narrative monograph becomes part of a larger discourse, where primary and secondary sources exist side by side, as do authors and commentators.”—Peter Meyers, Wired

“The lesson is that new media seldom drive out old. Instead, they rub along and interact in unanticipated ways. James O’Donnell, a classicist turned infotech guru, explores this ever-shifting ecology of communication in his eloquent new book.”—Boyd Tonkin, The Independent

“Is there room on the shelf for more than one history of reading? James O’Donnell proves there is with his Avatars of the Word. His entertaining and anecdotal style and easy movement between past and present is reminiscent of Alberto Manguel’s earlier work A History of Reading… A fascinating and important glimpse of a reading revolution that may affect us all.”—Paul Kincaid, New Scientist

“From the many strands of O’Donnell’s academic life he has woven a consideration of the ‘connections among speaking, writing, and reading today.’ Avatars of the Word is, however, about ever so much more than those connections. The implications and importance of the book’s contents are worth serious contemplation by all intellectuals—especially those who contribute to and draw from peer-reviewed scientific literature. The threads of Avatars lead from Socrates and Plato; through the Alexandria and other libraries, codices, Augustine, Cassiodorus, and both old and new liberal arts; to the virtual library, hyperlinking, distance education (and other threatening attributes of the 21st-century university) and the life of the mind in cyberspace.”—Michael A. Keller, Science

“O’Donnell approaches the ever-increasing distinction between a bound volume and a floppy disk by attempting to make clearer ‘what is happening or what might happen by thinking about similar transformations in the past.’ [O’Donnell] proves a most engaging guide, highlighting vignettes along man’s media highway from rock carvings to offset printing… His illumination of our changing uses of speech impresses with both scholarship and presentation.”—Ralph Hollenbeck, The Citizen

“In fulfilling his intentions, the author is interesting to cause one to enter, at any rate in the margins of his book, into frequent discussions with him: I should award him high praise.”—P. G. Naiditch, The Classical Bulletin

“[Avatars of the Word] reflects in lucid, thoughtful, and thought-provoking prose on the textual foundations of Western culture and the evolving connections among the technologies for recording, distributing, and preserving the written word from the late Latin antiquity to our contemporary age of electronic information… O’Donnell points out that improvements and innovations in technology initially tend to be perceived simply as better ways to do familiar tasks. Over time, their cumulative effects, which cannot be foreseen, much less controlled, create new and different environments to which individuals and societies must adapt. In Avatars, O’Donnell has chosen to speak to the positive potential consequences of electronic texts even as he acknowledges that there are other, less desirable possibilities.”—College and Research Libraries

“[James O’Donnell’s] approach to the long-term effects of the computer revolution on reading and higher education feels like a bracing, sophisticated exchange of ideas… His purpose is to compare the transformation already begun within the electronic medium to earlier transformations such as those from oral to written culture in ancient Greece, the papyrus scroll to the codex manuscript, and the codex to the printed book… The impression left on this reader is of someone deeply excited by the changes occurring and enthused at the possibilities inherent in the new medium.”—Greg Nixon, Journal of Consciousness Studies

“Avatars of the World is an extremely wide-ranging, engagingly readable, and thought-provoking book… The closing years of the twentieth century are indeed exciting times for the academic world and perhaps the greatest contribution that Avatars makes is to demonstrate the relevance and involvement of the study of classical antiquity in the debate. Classical scholars and teachers who are concerned for the continued well-being of their discipline in the rapidly advancing information age will enjoy reading it.”—John Hilton, Scholia Reviews

“The motivating idea behind the book is to offer a comparative examination of different moments of communications technology change: critically, from papyrus roll to codex (a change that I located in O’Donnell’s period), but also from oral to written culture, manuscript to print and handwriting to typewriting.”—Ian Saunders, The Year’s Work in Critical and Cultural Theory