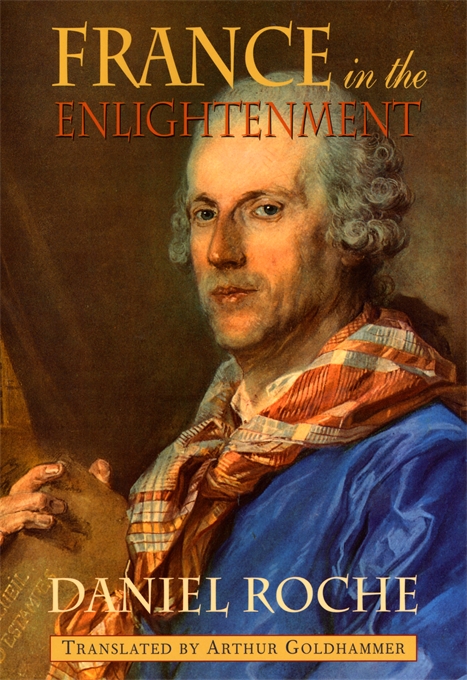 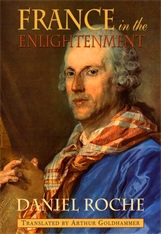 France in the Enlightenment

“France in the Enlightenment, first published in French five years ago and now expertly conveyed into English by that canonical translator of our time, Arthur Goldhammer, is the best cultural history of that extraordinary episode now available. Drawing on a whole generation of new work, it shares the fundamental premise of most historians now active in the field: that to study the Enlightenment is not simply, or even primarily, to study the origins of the French Revolution… Instead of scouring the Enlightenment for symptoms of revolution, [Roche] quarries the Revolution for echoes of the Enlightenment.”—William Doyle, New York Times Book Review

“His writings are encyclopedic, and he pioneered the study of early modern sociability as well as the attempt to integrate material culture into the history of mentalities and ideas. Having any book from his pen in English should be an event to be welcomed… Roche recapitulates his vast knowledge of the academies and the salons, recognizing as he does that the academies served the interests of the status quo far more than they propelled enlightened thinking… In the end Roche’s Enlightenment stands as optimistic and triumphant, and it represents ‘the triumph of life, belief in progress, expansion of concrete as well as philosophical individualism, a new material independence that changed people’s understanding of nature and society.”—Margaret C. Jacob, Canadian Journal of History

“An enduring legend paints the 18th century as elegant, frivolous, witty and charming…but Daniel Roche’s splendid book, sensitively translated by Arthur Goldhammer, dispels fantasies and puts legends in their place. It shows how false they are and yet how true, how sweet and promising life must have been for some, how miserable for many and, above all, how much more interesting reality is than nostalgic myths… [Roche’s chapters] are lively, lucid and lavish with information. He gives us the best kind of history: a crowded panorama presented with panache that interweaves solid information with anecdotes, cameos and lively illustrations.”—Eugen Weber, Los Angeles Times Book Review

“[France in the Enlightenment shows] how French society as a whole changed in the 18th century—at the top, in the rapidly growing middle and even at the bottom—toward those characteristics regarded as modern: greater rationality in human affairs, expanding secularism, a growing acceptability of democratic institutions and the blossoming of belief in the possibility of progress… Mr. Roche’s achievement in this book is to show how France changed gradually over the 18th century in almost every aspect of life… Mr. Roche covers this panorama with panache. What’s amazing is how much he covers—Paris as well as the provinces, merchants as well as nobles and peasants and the urban poor. Readers…[will] admire his superb use of the telling anecdote or perfect quotation from the era in question. They provide welcome detail to this vast canvas. Arthur Goldhammer’s translation from the French is eloquent and to the point.”—Stephen Goode, Washington Times

“Roche brilliantly describes the turmoil of a society on the verge of Revolution, and documents the way people viewed, worked with and worked against the institutions of the Old Regime. Filled with fascinating detail, this ‘panorama of a whole civilization’ opens up new areas of research as it moves the reader through the various institutions which finally clashed in 1789. Written with elegance and authority (and ably translated by Arthur Goldhammer), this book is destined to become one of the standard studies of eighteenth-century France.”—Virginia Quarterly Review

“Daniel Roche…give[s] us a brilliant portrait of France in the Enlightenment that describes how royalty and peasants alike lived, what connected and separated Paris and the provinces and how the ‘culture of appearances’ dominated society at all levels. He also examines the complex interactions of new ideas, old values, economic realities, social structures and geographic loyalties that produced the Enlightenment, then destroyed it.”—Dallas Morning News

“Roche’s writing is dense with example—he has delved into every corner of French life under the ancien regime, into parish and departmental records, government reports on trade and transport and forestry, into the writings of philosophers, divines, ministers, provincial and urban memorialists, some of them obscure (such as the glazier Jacques-Louis Metetra), into almanacs, libraries, academies, Masonic lodges, town and village fairs; but everything he brings to the text is there to stiffen his cumulative picture of a complex and contradictory society in which ‘change is happening in a world that saw itself as stable, changeless and coherent by virtue of ancient principles and age-old values.’ What interests Roche is the way changes are connected. He is as detailed and meticulous as Tocqueville, whose great book his own both complements and rivals… ‘Mastery of Space’, ‘Time and History’, ‘Peasant France and Merchant France’, ‘The Kingdom of Exchange’—the grandeur and scope of Roche’s book is there in these early chapter headings. The world it opens up, and the terms it offers for understanding it, seem classically French, demanding but full of charm—a charm that lies in the elegance and energy with which ideas are handled, and the effortless rigour and clarity of the language, Nothing goes unremarked upon or unconsidered, but for all its density the writing is open to horizons: it breathes.”—David Malouf, Australian Review of Books

“Roche’s awe-inspiring familiarity with both primary and secondary sources over a vast field allows him to conduct a debate on one aspect of French society after another, in which he tends to assume the reader’s familiarity with what actually happened. Those whose previous knowledge of the period inclines them to challenge some of his conclusions or to dispute some of his assertions will emerge from his survey both better informed and with more matter for argument.”—Norman Hampson, French History

“This book is much more than a simple history of the Enlightenment—it is social and intellectual history combined… This is a brilliant and sweeping work of synthesis by one of the most prominent historians of 18th-century France.”—Marie Marmo Mullaney, Library Journal

“An excellent book, the summation of a lifetime’s effort. A complete history of a sophisticated culture on the edge of crisis and transfiguration.”—Patrice Higonnet, author of Goodness beyond Virtue: Jacobins during the French Revolution