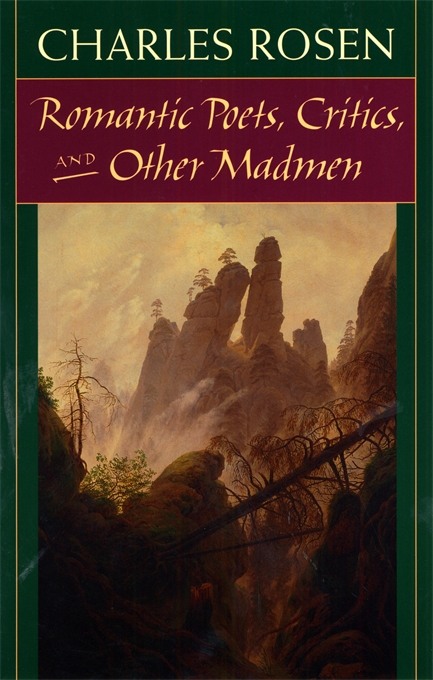 Romantic Poets, Critics, and Other Madmen

Few can match Charles Rosen’s cultivation and discernment, whether as pianist, music historian, or critic. Here he gives us a performance of literary criticism as high art, a critical conjuring of the Romantic period by way of some of its central texts.

“What is the real business of the critic?” Rosen asks of George Bernard Shaw in one of his essays. It is a question he answers throughout this collection as he demonstrates and analyzes various critical approaches. In writing about the Romantic poets Lord Byron, William Wordsworth, William Cowper, and Friedrich Hölderlin, he examines the kind of criticism which attempts to uncover concealed code. He investigates the relationship between Romantic aesthetic theory and artworks, and explores the way Romantic art criticism has been practiced by critics from Friedrich Schlegel to Walter Benjamin. In essays on Honoré de Balzac, Robert Schumann, Gustave Flaubert, and others, he highlights the intersections between Romantic art and music; the artist’s separation of life and artistic representations of it; and the significance of the established text.

With an apt comparison or a startling juxtaposition, Rosen opens whole worlds of insight, as in his linking of Caspar David Friedrich’s landscape painting and Schumann’s music, or in his review of the theory and musicology of Heinrich Schenker alongside the work of Roman Jakobson.

Throughout this volume we hear the voice of a shrewd aesthetic interpreter, performing the critic’s task even as he redefines it in his sparkling fashion.