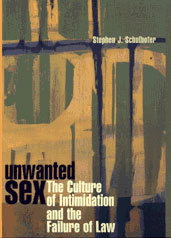 The Culture of Intimidation and the Failure of Law

“[Schulhofer] leaves no stone unturned in addressing the question of how to create a law which will take seriously sexual autonomy—the right to choose freely whether and when to be sexually intimate with another person. He argues that unlike laws that provide for comprehensive protection for property rights, labour and other important interests, laws on sexual autonomy have failed: from the excessive degree of force needed for an action to be defined as rape, to the grey areas in which coercion and exploitation can be used to elicit a false, legally valid ‘consent’ between, for example, professionals—such as doctors, lecturers, lawyers and therapists and their clients or students. Schulhofer calls for a radical reconstruction of such laws [and] does not shirk difficult questions… This is an insightful and scholarly book written in an accessible style rarely encountered in law. Even rarer is Schulhofer’s willingness to debate feminist views in a balanced and enlightened way.”—Sue Lees, The Times Literary Supplement

“In this extraordinary book, Stephen J. Schulhofer makes very clear that unwanted sex, ranging all the way up to rape, is not always viewed as criminal behavior. Schulhofer…offers us a new way of viewing the subject of rape. He also offers a proposal for change that makes overwhelming sense… [An] immensely readable, sometimes shocking book.”—Susan Alexander, ABA Journal

“Powerfully argued and meticulously documented, fully supported by statistical, legal, and other theoretical grounding… Exceedingly well written. I couldn’t say that [Unwanted Sex is] a pleasure to read, since the subject matter is so outrageous and upsetting. This is not a topic for the faint hearted, and [Unwanted Sex is] full of powerful examples, all the more infuriating because they are real cases.”—Patricia Smith, Hypatia

“Schulhofer sets himself the task of examining and explaining why, in spite of so much recent legal reform, the laws against rape and sexual harassment fail to protect women… Schulhofer’s overriding moral precept is that respect for sexual autonomy requires a radically different view [of consent].”—Susan Edwards, New Law Journal