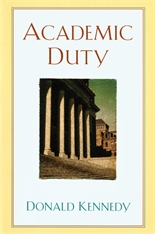 “For anyone interested in the future of higher education in this country, Donald Kennedy’s important new book, Academic Duty, is the place to start… Much has been written about academic freedom, little about academic responsibility. Kennedy’s account of the multiple demands on scholars to publish, to teach well, to mentor, to serve the university, to reach beyond the walls of academe and to risk change captures both the pleasures and pitfalls awaiting those entering the profession. His analysis also dispels many of the myths about what professors do that have undermined popular confidence in the academic world… As Kennedy makes clear, the future of research universities is bound up in their tangled partnership with both government and industry; how universities will define their role in this partnership remains to be seen.”—James Shapiro, The New York Times Book Review

“Academic Duty is a stimulating book… The main arguments have been tested in a seminar Kennedy organised for senior doctoral students at Stanford, and part of his purpose in writing the book is to offer advice and guidance to those about to enter university professions. He is good at identifying problems… [Kennedy’s approach] is bracing and the book is a good read. [He] puts his case forcefully, drawing generously on his own experiences and pulling no punches on issues that matter to him, such as the definition and maintenance of a core curriculum, the dangers of policies of positive discrimination, or of giving way to fashionable fads.”—Gordon Johnson, The Times Higher Education Supplement

“The best sections of [Academic Duty] concern government regulations about university scientists. Mr. Kennedy served as commissioner of the Food and Drug Administration during the Carter Administration and thus knows quite a bit about regulation. He is also good on the issue of plagiarism, and is surprisingly firm in his call to universities to resist the efforts of animal rights activists to restrict the use of animals in research.”—Martin Morse Wooster, The Washington Times

“Academic Duty is a chatty, elegantly written book offering an inside view of university by someone who knows: Donald Kennedy… It’s a good primer for would-be presidents or outsiders who think they have a new model for the university. One of its great virtues is that it recognizes the vast and irreducible array of competing claims and purposes that a university must fulfill… Unlike so much of the literature on the university, this book strives to be fair, balanced and non-ideological, preferring to find a middle ground on thorny issues of tenure, research and publication, ownership of ideas, performance measurement and that popular campus buzz term ‘total quality management.’”—Peter C. Emberley, The Globe & Mail

“The traditional role of the professoriate is being challenged, not only by the pace of information, but also by challenges to reinvent itself in response to the criticisms coming from both inside and outside the academy. Donald Kennedy sees the changing culture in higher education shifting from an emphasis on academic freedom—the cornerstone of the modern university—to its counterpart, academic duty.”—Alexander Gonzalez, The San Diego Union-Tribune

“An important and timely book that explores the implications of academic responsibility and the obligations of the professoriate. The importance of this book lies in the fact that, within the university, ‘professional responsibility’ is taught to everyone except those headed for the university itself. The book is timely because, if professors are unwilling to establish reasonable norms and standards for their own professional conduct and performance, others—who will be less qualified and less sympathetic—will do so… The discussions are thoughtful, lucid, and enlivened with examples and case studies, both fictitious and real. Kennedy writes as both an observer and participant with regard to many of these important activities and the difficult questions they have provoked… The writing is lean, lively, thoughtful, sensitive, balanced, and never pedantic… Donald Kennedy has given us a splendid book on a topic of great importance.”—Frank H. T. Rhodes, Science

“Kennedy is impressively knowledgeable about the particulars of academic life and eminently worth listening to. For anyone looking for examples of ethical problems in the academy, his ancedotes, real and fictitious, are a rich source.”—Ethics

“In Academic Duty [Kennedy] tries to help us understand why respect for academia does not seem to be a characteristic of American culture, to explain why this is dangerous as well as uncomfortable, and to offer a prescription. Kennedy writes from a remarkable record of experience and service. He is a gifted teacher, researcher and administrator, and over the past 40 years has been a faculty member, provost and university president, as well as senior official in the federal government. His book represents a continuation of this pattern of service, for he has provided a rich source of information and advice that should be read by anyone involved in academic life today.”—Michael J. Zigmond, Nature Medicine

“In taking up the issue of academic duty, Kennedy has performed a valuable service directed at rescuing our great research universities from their entrenched follies.”—Daniel S. Greenberg, Nature

“Bureaucrats, activists, accountants, and recruiters have all breached the walls of the Ivory Tower, turning the university into the hottest battlefield in our cultural wars. During his 12 years as president of Stanford, Kennedy learned well the tactics and—even more important—the stakes in this campus combat. But unlike many colleagues zealous only to preserve their academic freedom, Kennedy defends an oft-neglected sense of academic duty—an integrative sense of social responsibility without which the university cannot renew or advance our civilization. Regardless of the issue—plagiarism, tenure, fund-raising, sexual harassment—he challenges scholars, administrators, and informed citizens to resist the media hype and the political slogans that obscure the ethical complexities in higher education. Resolving these complexities will require the kind of candor and moral commitment Kennedy demonstrates here as he anticipates the real needs of the next generation of students. This is a book that considerably brightens the prospects for meaningful educational reform.”—Bryce Christensen, Booklist

“After twelve years at the helm of Stanford, Donald Kennedy has just the right stuff to help us understand that the university is not an Ivory Tower but a vibrant institution that both conserves our highest attainments and leads the way into new knowledge domains, not locally or even just nationally, but globally. This is a book for all who care about higher education.”—Warren Christopher, former U.S. Secretary of State

“Academic Duty is an immensely impressive tour of the American university by a guide who has lived what he describes. He speaks with admirable objectivity and fairness of the world he knows so well. He describes with even-handed candor the problems the universities face, and shows how they might meet the challenges ahead. Academic Duty will take its place on the very short list of classic works on the American university.”—John W. Gardner, former U.S. Secretary of Health, Education, and Welfare, and founder of Common Cause

“This is an extraordinary book. Kennedy’s rich experience and incisive intellect provide the reader with deep insights into one of greatest institutions, the research university. These insights illuminate core tasks, values, organizational problems, great accomplishments, and paths twoard a creative future for the research university. Anyone who cares about the prospects for higher education will find this book valuable.”—David A. Hamburg, M.D., President Emeritus of the Carnegie Corporation of New York

“The vast literature on higher education contains many items discussing academic freedoms and privileges but very few concerning faculty responsibilities. This book goes a long way to fill that gap. Every president, dean and professor could profit from considering what Donald Kennedy has written.”—Derek Bok, President Emeritus of Harvard University, and author of State of the Nation