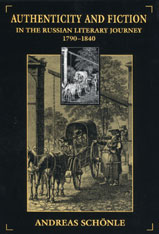 Authenticity and Fiction in the Russian Literary Journey, 1790-1840

This comprehensive study of the Russian literary travelogue, a genre that blossomed in the early nineteenth century, sheds new light on Russian literature and culture of the period.

In the decades before and during the rise of the Russian novel, a new form of prose writing took hold in Russia: travel accounts, often fictional, marked by a fully developed narrator’s voice, interpretive impressions, scenic descriptions, and extended narrative. Prompted in part by the growth of leisure travel and in part by publication of Western European examples of travel writing, the genre attracted the talents of numerous writers, including Radishchev, Karamzin, and Pushkin. In illuminating analyses of major texts as well as lesser known but influential works, Andreas Schönle surveys the literary travelogue from its emergence in Russia to the end of the Romantic era. His study offers new insight on the construction of the authorial persona and on the emergence of fiction in a culture that valued nonfiction writing.