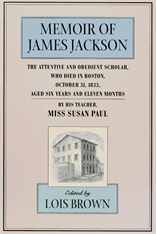 The Memoir of James Jackson, The Attentive and Obedient Scholar, Who Died in Boston, October 31, 1833, Aged Six Years and Eleven Months

“A fascinating look at an African-American child’s life over a century and a half ago.”—Henry Louis Gates, Jr., Africana.com

“Fortunately now restored to publication, this significant cultural artifact still makes meaningful reading today. Paul was a young black teacher in Boston who, when she published an account of one of her little students in 1835 titled Memoir of James Jackson, made history as the author of the first African American biography… The Memoir itself is a heartfelt profile, easy to immerse oneself into, and from it the contemporary reader not only meets a special child but also gathers information on black education in the antebellum North.”—Brad Hooper, Booklist

“This fascinating little book is a two-for-one: it offers a remarkably instructive, 63-page introductory essay by Brown and a 66-page biography written in 1835 as a didactic spiritual narrative—a work of evangelical juvenilia—by Paul, then the 26-year-old daughter of a leading black New England family… Paul’s extended eulogy unveils a black child’s socialization at home, church, and school in the 1830s—a process too rarely glimpsed in any documented detail. Brown’s adept annotations combine with her introduction and Paul’s text to produce an explication and exposition that command attention from a wide range of scholars and general readers interested in African Americans, women’s studies, children’s literature, social history, regional history, the antebellum era, and more.”—Thomas J. Davis, Library Journal

“The Memoir of James Jackson is a significant antebellum biographical narrative because it documents the interior life of a black male child in a way that had never been done previously. It illuminates and emancipates James’s subjugated spiritual and intellectual ‘voice,’ serving as a reminder that the complex experiences and voices of black children, both past and present, are often silenced and neglected. Thus, the Memoir offers a valuable chapter to the unfolding history of black education, African American history, and the black religious experience.”—Karen A. Johnson, The North Carolina Historical Review

“The editor and author of the introduction to The Memoir of James Jackson makes a compelling case for its uniqueness. What we have here is an 1834 memoir written by Susan Paul, an African American teacher in Boston, about her special and precocious, and apparently deeply pious, young six-year-old student, James Jackson. This narrative is unique. It is about the domestic and religious lives of Northern free blacks. Most slave narratives are, of course, about the story of ‘from slavery to freedom.’ Indeed, this is not a slave narrative at all. This work fits so squarely into the context of the evangelical abolitionism of the early 1830s that it may, indeed, be original not only because of its quality as a spiritual narrative, but because it is about a free black child. Brown has succeeded very well in demonstrating that this book is distinctive as a work that illuminated the free black domestic, religious, and educational worlds of a Northern city.”—David W. Blight, Amherst College

“Lois Brown’s rediscovery of the story of James Jackson is a stunning and important contribution to the history of African American childhood. Her reading of this early text helps us to understand the complex moral and social burdens of children of color in antebellum America.”—Joan Jacobs Brumberg, Cornell University

“The Memoir of James Jackson by Susan Paul is an extraordinary document and is an important addition to the literature in black and American educational history. The publication of this unique religious or spiritual biography of a Black child in antebellum Boston written by his school teacher, a woman from a prominent free Black family, makes a significant contribution to African American History, Black women’s history, and African American religious studies. Just as scholars discovered Incidents in the Life of a Slave Girl, edited by Jean Fagan Yellin, to be of enormous value as a window on the inner lives of women in bondage, so too will they find in the moving and insightfully edited Memoir of James Jackson a lens to the inner life of a free Black child. [This is] a gem of a contribution to African American history, and combines with Lois Brown’s thoughtful introduction to enrich the emerging fields of Black women’s and Black children’s history.”—Darlene Clark Hine, Michigan State University