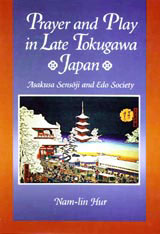 The unique amalgam of prayer and play at the Sensōji temple in Edo is often cited as proof of the “degenerate Buddhism” of the Tokugawa period. This investigation of the economy and cultural politics of Sensōji, however, shows that its culture of prayer and play reflected changes taking place in Tokugawa Japan, particularly in the city of Edo. Play was an integral part of the business of religion at Sensōji, and the temple supplied both in equal measure to often rootless Edoites.

Nam-lin Hur’s reappraisal of prayer and play and their inherent connectedness provides a cultural critique of conventional scholarship on Tokugawa religion and shows how Edo commoners incorporated cultural politics into their daily lives through the pursuit of prayer and play.