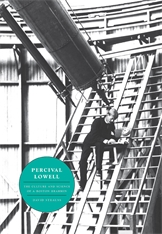 The Culture and Science of a Boston Brahmin

This engaging and wide-ranging biography casts new light on the life and careers of Percival Lowell. Scion of a wealthy Boston family, elder brother of Harvard President Lawrence and poet Amy, Percival Lowell is best remembered as the astronomer who claimed that intelligent beings had built a network of canals on Mars. But the Lowell who emerges in David Strauss’s finely textured portrait was a polymath: not just a self-taught astronomer, but a shrewd investor, skilled photographer, inspired public speaker, and adventure-travel writer whose popular books contributed to an awakening American interest in Japan.

Strauss shows that Lowell consistently followed the same intellectual agenda. One of the principal American disciples of Herbert Spencer, Lowell, in his investigations of Japanese culture, set out to confirm Spencer’s notion that Westerners were the highest expression of the evolutionary process. In his brilliant defense of the canals on Mars, Lowell drew on Spencer’s claim that planets would develop life-supporting atmospheres over time.

Strauss’s charming, somewhat bittersweet tale is the story of a rebellious Boston Brahmin whose outsider mentality, deep commitment to personal freedom, and competence in two cultures all contributed to the very special character of his careers, first as a cultural analyst and then more memorably as an astronomer.