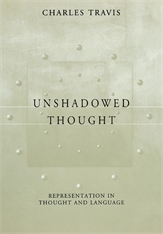 Representation in Thought and Language

This book mounts a sustained attack on ideas that are dear to many practitioners of analytic philosophy. Charles Travis targets the seductive illusion that—in Wittgenstein’s terms—“if anyone utters a sentence and means or understands it, he is operating a calculus according to definite rules.” This book rejects the idea that thoughts are essentially representational items whose content is independent of context. In doing so, it undermines the foundations of much contemporary philosophy of mind.

Travis’s main argument in Unshadowed Thought is that linguistic expressions and forms are occasion-sensitive; they cannot be abstracted out of a concrete context. With compelling examples and a thoroughgoing scrutiny of opposing positions, his book systematically works out the implications of the work of J. L. Austin, Hilary Putnam, and John McDowell. Eloquently insisting that there is no particular way one must structure what one relates to, no one way one must represent it, Unshadowed Thought identifies and resists a certain strain of semantic Platonism that permeates current philosophy—a strain that has had profoundly troubling consequences for our ideas about attitudes and beliefs and for our views about what language might be.