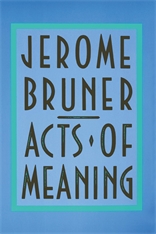 Four Lectures on Mind and Culture

“The failure of the cognitive revolution to unravel the mysteries of the workings of the human mind as the creator of meanings is the starting point for Jerome Bruner’s Acts of Meaning. He argues that psychology should return to human concerns, especially the role of culture in shaping our thoughts and the language we use to express them… [He] seems to have read and assimilated everyone else’s ideas on the topics he discusses. He can—and does—allude to them in context, so that we are constantly rubbing elbows with the giants on whose shoulders he stands. Erudite and recondite, the text glistens with Bruner’s bold style.”—Dava Sobel, The New York Times Book Review

“Bruner again demonstrates his impressive range of interest as he proposes nothing less than to set the essential agenda for psychology today… Bruner aims his manifesto not at the behaviorists—he considers that struggle long since won—but at those members of his own cognitive party who have sold their souls to the computer… [He] describes how psychology can rededicate itself to the study of meaning and its formation. Having spent an illustrious career ascending the mountain, he now takes an elder statesman’s panoramic view… Those interested in the current debates in psychology will find [this] book provocative and stimulating.”—Paul Buttenwieser, The Washington Times

“Acts of Meaning, written by one of the most distinguished thinkers in human development, is an insightful summary of the past trends in the field, and is, perhaps, a prophetic glimpse into the future. Bruner’s breadth of knowledge makes for thought-provoking and enjoyable reading for anyone interested in human culture.”—Harvard Educational Review

“[An] extended, contemplative essay on the role played by narrative in the construal of meaning. In [this] work, Bruner elaborates on the failure of cognitive science in abandoning ‘meaning-making’ for ‘information processing,’ and its attendant concentration on computational logic… Bruner, as one of the most influential psychologists of this century, makes an important statement well worth reading.”—Choice