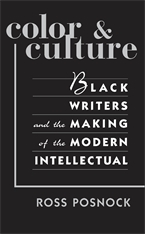 Black Writers and the Making of the Modern Intellectual

“In this solidly academic volume, Posnock presents the black intellectual from an historical viewpoint, addressing them as a social group unto themselves. Looking back over a century ‘from Frederick Douglass to Patricia Williams,’ he addresses the myriad causes for which ‘high culture’ blacks have fought, stretching still wider the discussion of black history in America.”—Samiya A. Bashir, Black Issues Book Review

“Ranging freely across the twentieth century, Posnock’s emphasis is on intellectual history, with an occasional admixture of literary criticism… Color and Culture is one of those books so prolific in suggestion, so stimulating in its juxtapositions, so profound in its critique of racial essentialism, that the reviewer’s task becomes an exercise in frustration: such intellectual riches do not lend themselves to a short summary.”—Christine MacLeod, Modern Language Review

“Color and Culture is a magnificent contribution to American literary history. Monumentally important in its exploration of the tensions between ethnicity and cosmopolitanism, Professor Posnock’s book is the work on black literature that I have been waiting to read for three decades, one that both liberates and enlarges our discussions on racial identity and a century of black intellectual commerce from Du Bois to Samuel Delany.”—Charles Johnson, author of Dreamer and the National Book Award winner, Middle Passage

“This learned, passionate apologia for cosmopolitan black intellectuals unsettles familiar figures and categories. Whether one is assenting to Color and Culture, arguing with it, or (as I often found myself) doing both at the same time, this is a book to contend with.”—Michael P. Rogin, author of Blackface, White Noise

“Posnock’s analysis starts from the observation that fixing identity, à la multiculturalism or postmodernism, has had destructive political, cultural, and social effects. Most discussion of public intellectuals presumes black writers are relative late-comers to the intellectual cadre. Posnock’s book turns the recent discussion on its head. Taking a cue from Adolph Reed, Posnock admires black intellectuals precisely when they refuse the burden of representing or speaking for the race.”—Kenneth W. Warren, author of Black and White Strangers