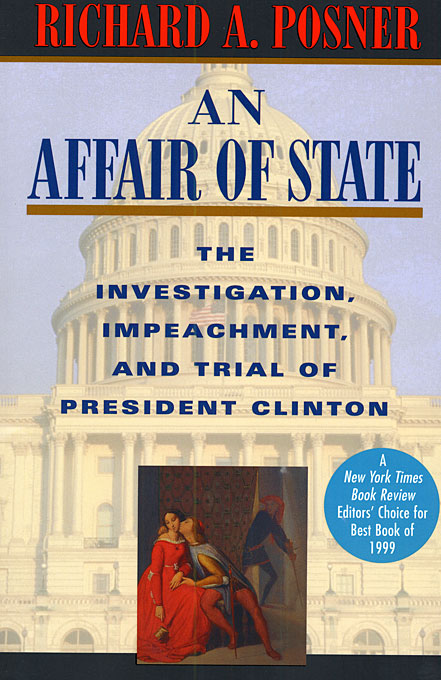 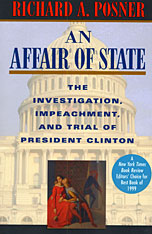 An Affair of State

The Investigation, Impeachment, and Trial of President Clinton

President Bill Clinton’s year of crisis, which began when his affair with Monica Lewinsky hit the front pages in January 1998, engendered a host of important questions of criminal and constitutional law, public and private morality, and political and cultural conflict.

In a book written while the events of the year were unfolding, Richard Posner presents a balanced and scholarly understanding of the crisis that also has the freshness and immediacy of journalism. Posner clarifies the issues and eliminates misunderstandings concerning facts and the law that were relevant to the investigation by Independent Counsel Kenneth Starr and to the impeachment proceeding itself. He explains the legal definitions of obstruction of justice and perjury, which even many lawyers are unfamiliar with. He carefully assesses the conduct of Starr and his prosecutors, including their contacts with the lawyers for Paula Jones and their hardball tactics with Monica Lewinsky and her mother. He compares and contrasts the Clinton affair with Watergate, Iran–Contra, and the impeachment of Andrew Johnson, exploring the subtle relationship between public and private morality. And he examines the place of impeachment in the American constitutional scheme, the pros and cons of impeaching President Clinton, and the major procedural issues raised by both the impeachment in the House and the trial in the Senate. This book, reflecting the breadth of Posner’s experience and expertise, will be the essential foundation for anyone who wants to understand President Clinton’s impeachment ordeal.