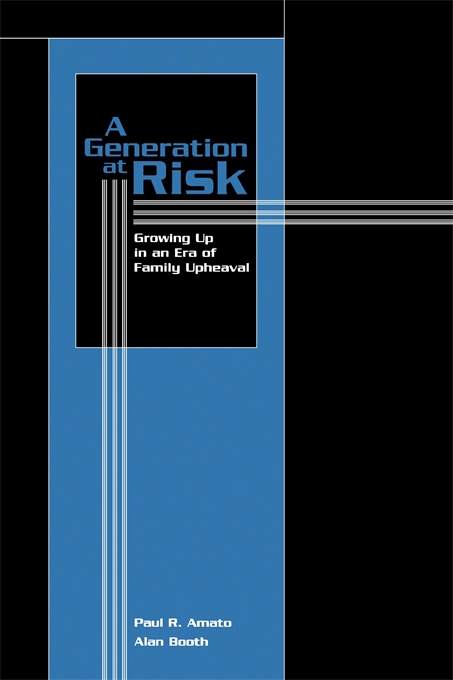 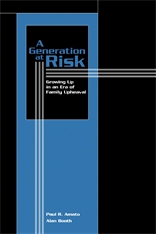 A Generation at Risk

Growing Up in an Era of Family Upheaval

“An important new book… Paul Amato and Alan Booth painstakingly analyze data from a large national sample of families, seeking especially to isolate the independent effects of divorce on children from the effects of preexisting marital conflict. The results call into question the rationalizations of our high divorce rate… Amato and Booth estimate that at most a third of divorces involving children are so distressed that the children are likely to benefit. The remainder, about 70%, involve low-conflict marriages that apparently harm children much less than do the realities of divorce… This remarkably countercultural conclusion will provoke many predictable reminders about toxic marriages and many repetitions of the familiar bromide that marital unhappiness, not ‘divorce per se’ is the real problem. But because of this book, we also will have a more informed discussion of the moral dimensions of the decision to divorce. Amato and Booth have helped us to recognize more clearly the potential conflicts between parental responsibility and adult desires for freedom, romance, sexual gratification and self-actualization.”—Norval D. Glenn and David Blankenhorn, The Los Angeles Times

“What are the long-term effects on children of the great changes in the family that have occurred over the past several decades? …Paul Amato and Alan Booth’s impressive study is one of the first to provide us with long-term data on this generation… Theirs is one of the few longitudinal surveys to measure marital quality and then to follow offspring for a long period, during which some of the parents divorce… A Generation at Risk is an important addition to the literature on the long-term effects of families on their children.”—Andrew J. Cherlin, American Journal of Sociology

“A Generation at Risk summarizes [Amato and Booth’s] pioneering longitudinal study which, between 1980 and 1992, interviewed a representative sample of 1,193 married persons with children. Amato and Booth also interviewed the adult children in 1992 and 1995. The book uses the life-course perspective and considers the impact of changing historical contexts on these families. It is intended for professionals, although the conclusions are vital to anyone who has even a passing interest in changes in contemporary families… This landmark work will frame scholarly discussions of parent–child dynamics for many years and belongs in every major library.”—Larry R. Peterson, History

“[This] longitudinal study of the consequences of family instability and change in the USA…focused upon two generations—the parents and their offspring—and looked at how the relations between them changed over the survey time… [The] study provides an excellent opportunity to test some favorite popular assumptions—such as whether witnessing unhappiness in the parental home would lead to the inability to have happy relationships in one’s own home. Or does having a ‘liberated’ or non-traditional mother harm children’s development? The advantage of a longitudinal study is that we can examine these differences on the same people over time… This study would be of relevance to youth researchers interested in the ‘life course’ perspective as it provides a range of data and information of a kind which is seldom normally available… This is a well organized and documented study discussing quantitative findings in an accessible and enlightening way.”—Claire Wallace, Journal of Youth Studies

“This important and disturbing book…carefully examines how parents’ socioeconomic resources, gender roles, and degree of marital happiness affect their children’s lives… It strikes a resounding note of alarm at recent trends in American family life. The work is based on the results of a finely drawn 15-year study of a nationwide sampling of married couples and their adult offspring. There are no glittering generalizations here; Amato and Booth provide rich contextual detail and easily readable tables as they consider, for example, the effect of maternal employment on daughters’ social integration (largely positive)… Public libraries should not be deterred by this book’s scholarly presentation: it speaks to us all.”—Ellen Gilbert, Library Journal