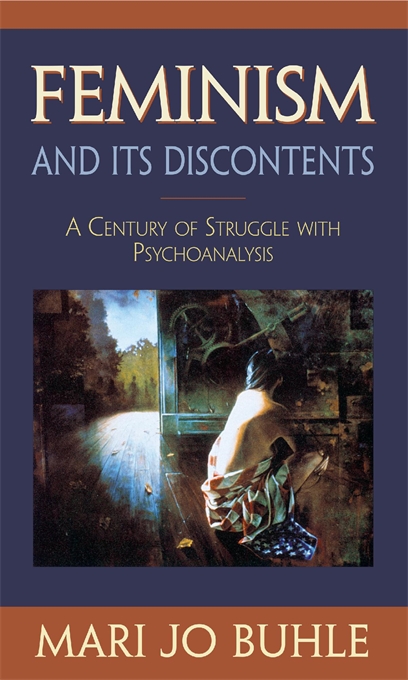 Feminism and Its Discontents

A Century of Struggle with Psychoanalysis

With Sigmund Freud notoriously flummoxed about what women want, any encounter between psychoanalysis and feminism would seem to promise a standoff. But in this lively, often surprising history, Mari Jo Buhle reveals that the twentieth century’s two great theories of liberation actually had a great deal to tell each other. Starting with Freud’s 1909 speech to an audience that included the feminist and radical Emma Goldman, Buhle recounts all the twists and turns this exchange took in the United States up to the recent American vogue of Jacques Lacan. While chronicling the contributions of feminism to the development of psychoanalysis, she also makes an intriguing case for the benefits psychoanalysis brought to feminism.

From the first, American psychoanalysis became the property of freewheeling intellectuals and popularists as well as trained analysts. Thus the cultural terrain that Buhle investigates is populated by literary critics, artists and filmmakers, historians, anthropologists, and sociologists—and the resulting psychoanalysis is not so much a strictly therapeutic theory as an immensely popular form of public discourse. She charts the history of feminism from the first wave in the 1910s to the second in the 1960s and into a variety of recent expressions. Where these paths meet, we see how the ideas of Freud and his followers helped further the real-life goals of a feminism that was a widespread social movement and not just an academic phenomenon. The marriage between psychoanalysis and feminism was not pure bliss, however, and Buhle documents the trying moments; most notably the “Momism” of the 1940s and 1950s, a remarkable instance of men blaming their own failures of virility on women.

An ambitious and highly engaging history of ideas, Feminism and Its Discontents brings together far-flung intellectual tendencies rarely seen in intimate relation to each other—and shows us a new way of seeing both.