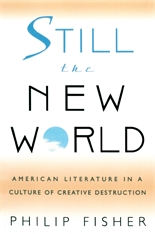 American Literature in a Culture of Creative Destruction

In this bold reinterpretation of American culture, Philip Fisher describes generational life as a series of renewed acts of immigration into a new world. Along with the actual flood of immigrants, technological change brings about an immigration of objects and systems, ways of life and techniques for the distribution of ideas.

A provocative new way of accounting for the spirit of literary tradition, Still the New World makes a persuasive argument against the reduction of literature to identity questions of race, gender, and ethnicity. Ranging from roughly 1850 to 1940, when, Fisher argues, the American cultural and economic system was set in place, the book reconsiders key works in the American canon—from Emerson, Whitman, and Melville, to Twain, James, Howells, Dos Passos, and Nathanael West, with insights into such artists as Winslow Homer and Thomas Eakins. With striking clarity, Fisher shows how these artists created and recreated a democratic poetics marked by a rivalry between abstraction, regionalism, and varieties of realism—and in doing so, defined American culture as an ongoing process of creative destruction.