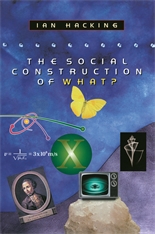 The Social Construction of What?

“[A] spirited and eminently readable book… Hacking’s book is an admirable example of both useful debunking and thoughtful and original philosophizing—an unusual combination of good sense and technical sophistication. After he has said his say about the science wars, Hacking concludes with fascinating essays on, among other things, fashions in mental disease, the possible genesis of dolomitic rock from the activity of nanobacteria, government financing of weapons research, and the much-discussed question of whether the Hawaiians thought Captain Cook was a god. In each he makes clear the contingency of the questions scientists find themselves asking, and the endless complexity of the considerations that lead them to ask one question rather than another. The result helps the reader see how little light is shed on actual scientific controversies by either traditionalist triumphalists or postmodern unmaskers.”—Richard Rorty, The Atlantic

“Ian Hacking is among the best philosophers now writing about science… He discusses psychopathology, weapons research, petrology, and South Pacific ethnography with the same skeptical intelligence he brings to quarks and electron microscopy. It is not his aim to enter a partisan controversy, still less to decide it. Instead, he clearly explains what is at stake—nothing less than the intellectual authority of modern science.”—Barry Allen, Science

“Hacking’s good humour and easy style make him one of those rare contemporary philosophers I can read with pleasure.”—Steven Weinberg, The Times Literary Supplement

“Hacking is a Canadian philosopher of science, with important studies of probability and psychology to his name. He is no less at home in Continental philosophy and social theory than in the Anglo-Saxon tradition. His ability to leap with enviable facility from one to the other qualifies him well to bring some order into this intellectual quagmire.”—Daniel Johnson, The New York Times Book Review

“A welcome and timely arrival. Both a philosopher of science and a contributor to constructionism, Hacking speaks across the great divide. As his book title implies, he finds that the terms of this intellectual engagement vary considerably from case to case, and that the terminology of this engagement has all too often been sloppily employed on both sides. Examining an eclectic range of examples, from a nasty ethnographic spat over Captain Cook’s murder on a Hawaiian beach to the influence of weapons research on the related hard sciences, he teases out the finer points that constitute the middle ground… By meting out credit while illuminating complexities, nuances, and missteps on both sides, Hacking’s work implicitly urges a truce in the science wars.”—Kenneth Gergen, Civilization

“The Social Construction of What? explores the significance of the idea of social construction, not simply in science but also in other arenas… Hacking’s arguments are important.”—Kenan Malik, The Independent

“The commonplace idea of science as the construction of models caught fire in the 1970s. It became—as Ian Hacking notes in his intelligent miscellany, The Social Construction of What?—a rallying cry for the radical optimists who relished the thought that social forms are transient and resented any attempt to freeze them for eternity on the authority of something called ‘science’… [Hacking] prefers to explore the territory that lies between the banalities. He concentrates on phenomena such as ‘child abuse’ or ‘women refugees’, wondering in what sense they existed before they were conceptualised as such and noting the ‘looping effects’ through which objective realities can be moulded by intellectual artefacts and hence by transient political and conceptual interests or even facts.”—The Times Higher Education Supplement

“This book offers a helpful contribution to the discussion of social constructionism and its limits, both for hard scientists who feel threatened by it and for those who practice it. This is a fun book, as Hacking takes pokes at social constructionists and clarifies what they are about.”—Matthew P. Lawson, Health, Illness, and Medicine

“An interesting and invaluable frontline perspective on the causes and results of the revolution from someone close enough to it to understand it and explain it to the rest of us. Its chief merits are its linguistic clarity, intellectual scope, and self-referentiality… Communication scholars who know little about social construction will find this a very readable introduction to the major ideas being debated.”—Scott R. Olson, Journal of Communication

“While informed by a sophisticated grasp of the issues, [The Social Construction of What?] is accessible, witty, and good-humored in tone. There are fascinating discussions of social constructionist claims regarding subjects are diverse as gender, Zulu nationalism, quarks, and dolomite.”—T.A. Torgerson, Choice

“Hacking is one of the best philosophers of science and society of our time. Here, as usual, he argues from carefully researched examples… This is a delightful book—evenhanded, fun to read, and packed with information on everything from nuclear physics, nanobacteria, and madness to the deification of Captain Cook.”—Leslie Armour, Library Journal

“[Ian Hacking] dispute[s] the claims of leftist professors, who try to fight oppression by showing that race, gender and sexuality, far from being legitimate bases for discrimination, are hardly real at all and merely the results of ‘social construction.’ In The Social Construction of What? the distinguished philosopher looks at how this kind of argument works, and particularly at cases—in the natural sciences, and with social phenomena like child abuse in which it can endanger a clear sense of what ‘reality’ is.”—Publishers Weekly

“In his Preface, Hacking describes this book as a kind of primer for noncombatants in the culture wars, understood as being fought between the ‘social constructionists’ who hold that knowledge is constitutively and importantly a social product, and those who see knowledge as being importantly distinct from the social realm (scientists being the exemplary instances of the latter). I especially like his discussion of the social sciences and their peculiar relation to their objects—the discussion of ‘interactive kinds’ and the ‘looping effect’ through which people can reflexively react to social science descriptions by, for example, acting out and upon such descriptions. There is an interesting line of development here concerning the difference between the social and the natural sciences, and the different senses of ‘construction’ that might be appropriate to each. The book accomplishes its chosen task in clarifying what constructionism is about and why people get excited about it. I might add that besides noncombatants in the culture wars, the book should interest and inform some of the combatants, too—it should help the anticonstructionists get clearer on the actual contours of their enemy’s position. Hacking is one of the most important philosophers working today.”—Andrew Pickering, author of Constructing Quarks and The Mangle of Practice