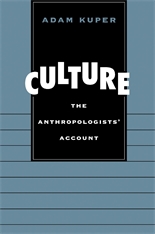 Suddenly culture seems to explain everything, from civil wars to financial crises and divorce rates. But when we speak of culture, what, precisely, do we mean?

Adam Kuper pursues the concept of culture from the early twentieth century debates to its adoption by American social science under the tutelage of Talcott Parsons. What follows is the story of how the idea fared within American anthropology, the discipline that took on culture as its special subject. Here we see the influence of such prominent thinkers as Clifford Geertz, David Schneider, Marshall Sahlins, and their successors, who represent the mainstream of American cultural anthropology in the second half of the twentieth century—the leading tradition in world anthropology in our day. These anthropologists put the idea of culture to the ultimate test—in detailed, empirical ethnographic studies—and Kuper’s account shows how the results raise more questions than they answer about the possibilities and validity of cultural analysis.

Written with passion and wit, Culture clarifies a crucial chapter in recent intellectual history. Adam Kuper makes the case against cultural determinism and argues that political and economic forces, social institutions, and biological processes must take their place in any complete explanation of why people think and behave as they do.