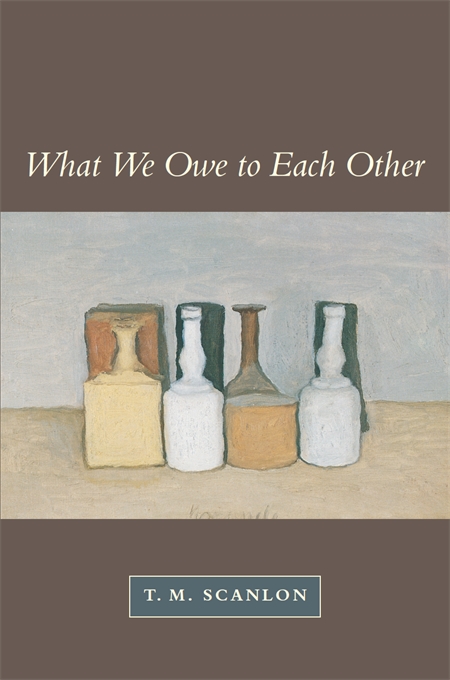 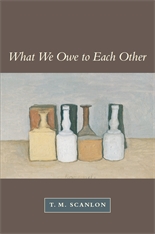 What We Owe to Each Other

“I rejoice in the appearance of this magnificent book. It is not often that a work on ethics opens up a novel, arresting position on matters that have been debated for thousands of years. And What We Owe to Each Other does precisely that.”—Philip Pettit, Times Literary Supplement

“Thomas Scanlon’s understanding of [morality’s] complexity and of its sources in the variety of human relations and values is one of the virtues of this illuminating book. To say that it is long awaited would be an understatement. Scanlon has been one of the most influential contributors to moral and political philosophy for years… The appearance of his first book, a complex and powerful argument for the moral theory first sketched in his essay ‘Contractualism and Utilitarianism’, is a philosophical event.”—Thomas Nagel, London Review of Books

“T.M. Scanlon is a scrupulous, astringent, relentlessly exact writer, without any of the fuss and flutter that come from the desire to please. His book is pure philosophy, unadulterated.”—Stuart Hampshire, New York Review of Books

“[Scanlon’s] discussions are deep and honest, and they illuminate many key concepts of moral philosophy: well being, trust, friendship, loyalty, promises. It would be—and will be—the business of more than one doctoral thesis to assess his success.”—Simon Blackburn, New York Times Book Review

“Mr. Scanlon has produced a compelling explanation of the moral thinking behind such duties as truth-telling and promise-keeping, and for this he deserves great praise.”—Douglas A. Sylva, The Washington Times

“What do we owe to each other? What obligations of honesty, respect, trust and consideration exist between people? That is the deep and ancient question Harvard philosopher T.M. Scanlon attempts to illuminate in this closely argued book. Its success as an argument illustrates why moral philosophy should matter… Scanlon is a careful and precise thinker, a leading figure in contemporary philosophy, and here he is working at the height of his considerable powers.”—Mark Kingwell, Globe and Mail

“Scanlon presents the most complete statement to date of his version of ‘contractualism’ …He treats as basic the notion that we have reason to want to live with others and are motivated to seek agreement on a set of principles for the general regulation of behavior that others similarly motivated could not reasonably reject… He carefully addresses many concerns that have been raised about his and similar versions of contractualism; anyone discussing contractualism will have to consider his account.”—D. R. C. Reed, Choice

“Scanlon offers a sharp challenge to much contemporary moral philosophy. Most philosophers think that agreements between people play only a subsidiary role in moral theory. What is right or wrong is independent of what people accept. Agreements rest on morality; they do not underlie it. Scanlon dissents. In his conception, morality depends on principles it would not be reasonable for people to reject. These agreements do not derive from further moral facts. Scanlon also challenges the view that desires give reasons for action, leveling heavy artillery at the contrary position of Bernard Williams. The originality, scope, and careful argument of this work mark it as an indispensable book.”—David Gordon, Library Journal