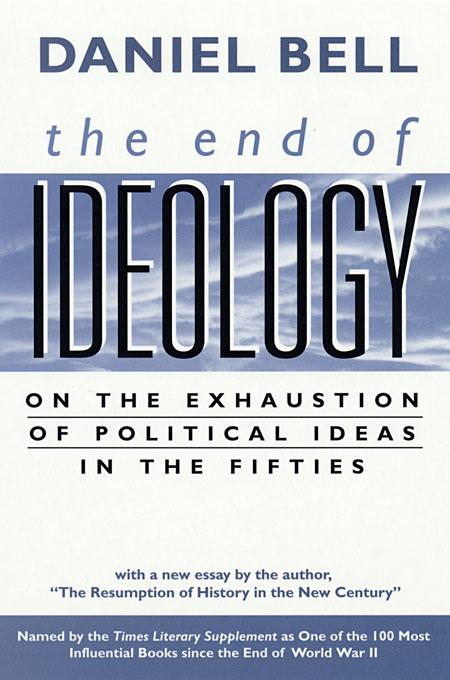 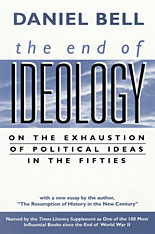 The End of Ideology

On the Exhaustion of Political Ideas in the Fifties, with "The Resumption of History in the New Century"

“Originally published in 1960, this collection of essays focuses on the protean nature of American society and the decay of Marxism and other systematic ideologies in the West… Arthur Schlesinger Jr. [has] admired the book’s ‘unflagging confidence, trenchancy, and authority.’”—Scott Veale, The New York Times Book Review

“A very polished book. The overall argument on the relationship of declining religious and rising national feeling is highly appropriate and particularly significant. Bell is obviously completely conversant with recent work by Habermas, Chartier, Gordon, Baker, and Crow, to name but a few authors whose findings he weaves into his own purpose. I was also taken with his thought on the relationship between national feeling in France and the awareness of France’s changing place in the world, and with that, of Britain’s surprisingly swift advance from 1688 to the middle decades of the eighteenth century. His pages on ‘Great Men’ as the vehicles of national sentiment are likewise very thoughtful.”—Patrice Higonnet, author of Goodness beyond Virtue

“The End of Ideology was one of the most influential, most controversial, and most misunderstood books about the 1950s. But it is not simply a central text of the intellectual history of those years (although it certainly is that). It is also a provocative discussion by one of America’s most creative thinkers of political and philosophical issues that concern us still.”—Alan Brinkley

“No one could consider himself politically literate without an intimate knowledge of the issues foreseen in The End of Ideology.”—Theodore Draper