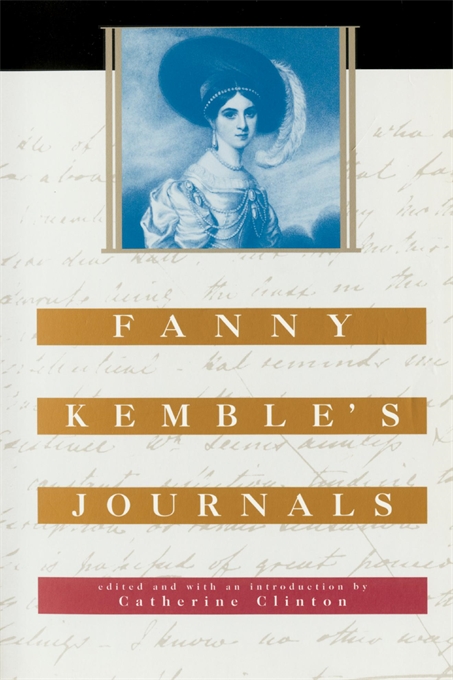 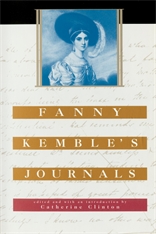 Edited and with an Introduction by Catherine Clinton

“A remarkable story…supplying color and atmosphere and Kemble’s distinctive voice… Her journal, begun when she was 18 and kept regularly into her 70s, records her sharp observations of roads and accommodations and social behavior in the young American democracy [and her] blunt indictment of racial hypocrisy and sexual exploitation… The voice that ‘reanimated the old drawing rooms, relighted the old lamps, retuned the old pianos,’ is captured again.”—David Walton, The New York Times Book Review

“Clinton’s edition of Fanny Kemble’s Journals offers fascinating selections from her heart-rending account of slavery and from earlier and later journals as well. Whether as a young girl weighing the pros and cons of marriage or as an older woman considering the question of women’s suffrage, Kemble’s keen mind and forthright style of expression are a constant delight.”—Merle Rubin, The Los Angeles Times

“Kemble’s life wasn’t entirely devoted to the rights of women and the wrongs of slavery: she acted and wrote, had triumphs, pleasures, and friends, and she often feels like our contemporary. Clinton doesn’t insist that her subject was flawless, but she finds her irresistible.”—The New Yorker

“[From] six books of memoirs, Clinton has extracted an anthology…of consistent interest. Kemble is forthright throughout, and never boring…she writes candidly about acting, social and economic contracts between England and America, slavery, politics, religion, the status of women, her reading and herself.”—Stanley Weintraub, The Wall Street Journal

“Kemble’s journal entries on slavery are both poignant and horrifying. She writes passionately against the use of slave women for sex by plantation owners, as well as the demands of backbreaking physical labor they performed.”—Robin Dougherty, The Boston Globe

“One of the most moving and edifying personal accounts I have ever read of how oppression of slaves—and, incidentally, of women, both black and white—resulted in a war that tore apart not just one family, but a whole nation.”—Ann Morrissett Davidon, The Philadelphia Inquirer

“In Fanny Kemble’s Journals, Clinton has edited down the journals and letters from a voluminous collection into a compendium of excerpts that gives the reader Kemble in her own voice.”—Stephanie Harvin, The Post and Courier [Charleston, SC]

“Kemble’s writing rings with passion, liveliness and wit. It is almost shocking in its clarity, precision and logic, its audacity and relevance. I marked dozens of passages in Fanny Kemble’s Journals to read to friends.”—Julie Brickman, The San Diego Union-Tribune

“Despite its welcome place in my library, when I finished [Catherine Clinton’s biography of Fanny Kemble, Fanny Kemble’s Civil Wars], I still felt that something was missing. An element of frivolity, a touch of wit, a hint of acerbity—of course! I missed…Fanny Kemble’s own voice. The antidote: Fanny Kemble’s Journals… So when I want Kemble’s exact words about a topic in the biography, I need only reach for this compact compilation… It’s been well more than a century since Kemble was widely toasted on either side of the Atlantic; perhaps her moment has arrived again.”—Annie Ludlum, The Seattle Times

“In Fanny Kemble’s Journals, Clinton has judiciously selected excerpts from Kemble’s six published journals… Kemble casts her keen eye on the many foibles and failings of those around her. Her journals blaze with the fire of her passionate desire for reform in social institutions and justice in inequitable relationships.”—Henry L. Carrigan, Jr., The State [Columbia, SC]

“Parting the curtains obscuring a nineteenth-century celebrity, historian Clinton offers…journal excerpts by a woman who was an actress, author, and abolitionst… Composed over her 80-plus years, Kemble’s journals convey a variety of nineteenth-century experiences, from the discomforts of travel to the wonders of Rome… Clinton has admirably restored to interest a multifaceted figure pertinent to Civil War and women’s studies.”—Gilbert Taylor, Booklist

“Kemble’s biographer, historian Catherine Clinton, has edited a slender volume, selecting the juiciest, most revealing and most incisive sections of Kemble’s oeuvre… Splendidly edited and handsomely designed, this collection clears room for readers to hear the unforgettable voice of Kemble herself, with little interference.”—Publishers Weekly

“I enthusiastically recommend Fanny Kemble’s Journals. Fanny Kemble has always been one of those mysterious fugitive characters about whom we would like to know more. With this new edition by Kemble’s modern biographer, these writings will take their place in college classrooms and on the shelves of readers interested in the theater, the South, the Civil War, and women’s studies. To shrink eleven volumes to one manageable one and to include the critical outlines of Kemble’s life as well as her observations on aspects of American life such as politics and slavery is quite a triumph. Kemble writings afford readers a fascinating retelling of the outlines of an unusual life. It is not exaggerating to say that the Clinton selections created a new autobiography that in the past was obscured by the sheer mass of Kemble’s memoirs. She is a terrific writer. Clinton has placed her emphasis on areas such as race, class, and women’s issues, including the story of the marriage. Clinton’s introduction locates the Journals within the context of Kemble’s life, and as every editor must do, she makes a strong case for their relevance and historical significance.”—Jean H. Baker, author of Mary Todd Lincoln

“Fanny Kemble has finally found a historian worthy of her remarkable career.”—Eric Foner, author of Reconstruction and The Story of American Freedom

“The fascination of a modern reader, I think, is partially rooted in the way Kemble braids a modernist sensibility (freedom, women’s rights) with conventional prejudices (class, ethnicity). Like Henry James, I find Kemble’s journals absorbing, and also like him, I presume, I find her beguiling.”—James L. Roark, Emory University