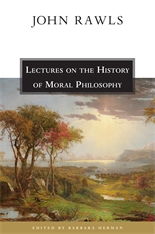 Lectures on the History of Moral Philosophy

“What names would we want to place next to Wittgenstein and Heidegger? No thinker, I believe, has a greater right to stand alongside them than John Rawls. Rawls’s A Theory of Justice, which appeared in 1971, changed forever the landscape of moral and political philosophy. Like Wittgenstein and Heidegger, Rawls has shown a remarkable capacity for self-criticism. Like them, he has gone on to revise in significant ways the doctrines that first established his fame… The publication of the Lectures on the History of Moral Philosophy is thus a major event, since here we find the conception of modern ethics as a whole, the understanding of its characteristic themes and problems, that has inspired Rawls’s political thought.”—Charles Larmore, The New Republic

“Rawls has an enormously authoritative and interesting way of thinking and writing about the history of philosophy. His approach and tone is that of a world-class athlete watching old films to analyze the technique of his great predecessors. It is a pleasure to listen in.”—Matthew Simpson, Journal of the History of Philosophy

“This volume draws together the final version of Rawls’ lecture notes on the history of modern moral philosophy. It offers probing discussions of Hume, Leibniz, Kant, and Hegel and of the four basic types of moral reasoning—perfectionism, utilitarianism, intuitionism, and Kantian constructivism. Readers could hardly find a more enlightening (if sometimes challenging) companion in exploring key historical approaches to life’s most fundamental moral and philosophical questions.”—Mary Carroll, Booklist

“Rawls’s ‘Kant Lectures’ have enjoyed a cult status so great that it has propelled dog-eared copies of his notes across campuses and generations. After being guided by Rawls’s able hand through the rigors of such texts as Kant’s Groundwork of the Metaphysics of Morals and Hume’s Treatise on Human Nature, readers will appreciate how Rawls’s generosity, both to students and subject, earned these Harvard lectures a place in legend.”—Kirkus Reviews

“Rawls is, of course, one of the major moral and political philosophers of the 20th century. These essays center on Kant’s moral philosophy as influenced by Hume’s and Leibniz’s and as it influenced Hegel. Throughout, Rawls tries to understand the distinctive questions each philosopher posed to himself and the specific answers he gave… Rawls’s deep, tightly argued, and lucidly presented analyses warrant close attention by students on the subject.”—Robert Hoffman, Library Journal