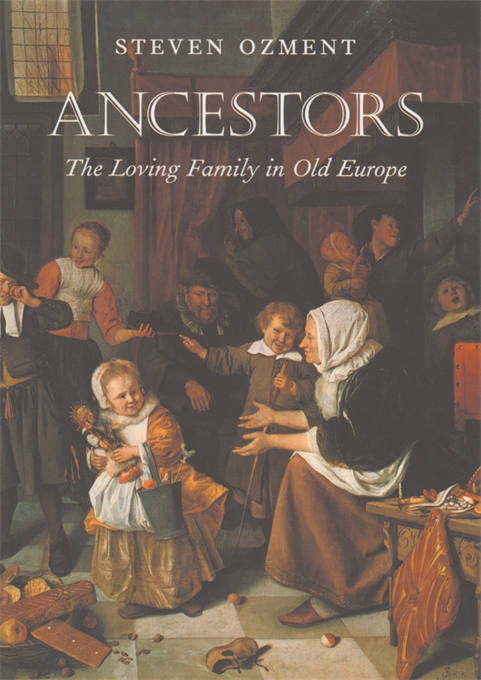 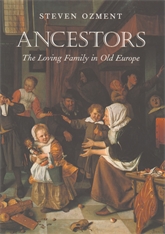 The Loving Family in Old Europe

“Ozment…has written a concise answer to [Philippe] Ariès and his admirers which can be read in a pleasurable couple of hours by the occupant of a Saturday sofa or a seat on a commuter train. In Ancestors…Ozment sets out to challenge a conception of the premodern family as a stifling patriarchal tyranny inimical to ‘bonds of deep affection or relationships of true equality’… Everybody interested in the history of the family should certainly read this thought-provoking little book, tract for the times as well as guide to the past.”—Ralph Houlbrooke, The Times Literary Supplement

“In the 1960s and 1970s a group of enormously influential historians…argued that pre-industrial families were…rigidly ‘patriarchal,’ and children were viewed mainly as assets; hence the deep bonds of love and care between parent and child which we now associate with the ‘nuclear family’ were essentially nonexistent. In this elegant, persuasive book…Ozment presents a very different picture. He argues that the relationship between spouses was far more cooperative and loving, and the affection of parents for their children was far fiercer, than [Philippe] Ariès and his disciples would have it… An example of scholarship confirming common sense (and refuting the highly theoretical work of once trendy historians)… Ancestors amounts to an eloquent—and academically unfashionable—condemnation of those historians who approach an earlier age ‘with an eye only to determining where that age stands on some burning present-day issue.’”—Benjamin Schwarz, The Atlantic

“Steven Ozment’s handsome short book Ancestors is an unashamed polemic, a robust if not uniformly persuasive defense of the existence of the ‘loving family in Old Europe,’ and an assertion of its fundamental continuity with modern family experience… Ozment is…a first-rate religious historian.”—Eamon Duffy, The New York Review of Books

“For some years now, says Steven Ozment…historians have been…maintaining that all the virtues we associate with families today—love, cooperation, mutual respect, the nurturing of children—are modern inventions, unknown in Europe prior to the Renaissance. Any evidence to the contrary [has been] dismissed as an exception to the rule. But how ‘exceptional’ can it be, Ozment asks, if sources ranging from the arts to legal records to advice books to private letters and diaries, from the days of the Roman Empire to the modern era, all attest not to a Dark Ages of the emotions but to an emotional life much like our own? From sources such as these he marshals ample proof that men and women throughout history have married for love, have raised their children with tender affection and sent them out into the world with a mixture of pride and trepidation, and that women’s work both inside and outside the home has been acknowledged and valued. Ozment speaks to a general audience, not just a scholarly one, when he warns us about the temptation to believe ‘that past, present, and future constitute absolutely different periods of time and fundamentally distinct types of humanity.’ How refreshing it is to find a scholar of Ozment’s stature speaking up for such homely notions as common sense and the persistence of human nature.”—The Boston Globe

“Ozment…has researched diaries, letters, fiction, and even woodcuts to present a picture of pre-industrial family life in Europe in the Middle Ages. He discusses such themes as working women…and women’s place in religion and society. He examines the practice of contraception (condemned by the church and justified by the laity), parent–child relations, infanticide, wet-nursing, and parental advice to children… Ozment’s absorbing look at some of our ancestors living in a wholly different society shows us how little things have changed.”—George Cohen, Booklist

“Ozment argues persuasively that…the family has not evolved slowly over the last five centuries into the sentimental, nuclear unit it appears to be today; rather, it has always been both the bedrock and the fault line of humankind. A groundbreaking work: The hammer of Ozment’s silvery prose and sturdy logic shatters the surprisingly fragile theories of some of the trendiest historians of the human family.”—Kirkus Reviews

“A major contribution to a field of historical study that has been particularly active over the last forty years. It provides a magisterial overview that is uniformly astute and fair-minded of a great many studies, both general and specific, written in many countries from many points of view, some of them highly controversial. It ends with a compelling explanation of the method underlying Ozment’s own substantial contributions to the field.”—Robert M. Kingdon, author of Adultery and Divorce in Calvin’s Geneva

“In this boldly written polemic Steven Ozment takes an enthusiastic cudgel to prevailing negative perceptions of Early Modern family life. Drawing on his unrivalled knowledge of contemporary family archives, Ozment shows that contrary to myth, relations between husband and wife, and between parent and child, were characterized by affection and mutual respect. This text, the product of half a lifetime of research and contemplation, will be an important point of departure for future scholarship on the subject.”—Andrew Pettegree, University of St Andrews

“This is vintage Ozment: fluent, insightful, provocative. Ancestors challenges us to take a fresh look at the way we approach the history of the family.”—Roderick Phillips, Carleton University

“Over the past three decades, Steve Ozment has brought to brilliant light and life the intricacies and intimacies of the Western family. This book is a crisp distillation of his most impressive findings, and a stirring declaration of a new historiography of the Western family.”—John Witte, Jr., Emory University