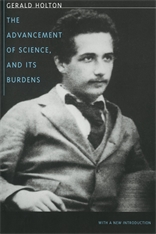 The Advancement of Science, and Its Burdens

How did Albert Einstein’s ideas shape the imaginations of twentieth-century artists and writers? Are there national differences between styles of scientific research? By what mechanisms is progress in science achieved despite the enormous diversity of individual, often conflicting, efforts?

These are just a few of the questions posed in The Advancement of Science, and Its Burdens. Gerald Holton, one of the century’s leading historians of science, continues his analysis of how modern science works and how it influences our world, with particular emphasis on the role of the thematic elements—those often unconscious presuppositions that guide scientific work to success or failure. Many of the conclusions emerge from the author’s extensive study of the contributions of Albert Einstein. Indeed, Holton’s new introduction for this edition, “Einstein and the Cultural Roots of Modern Science,” demonstrates that Einstein’s daring main pursuit, the discovery of unity among seemingly disparate aspects of physics, was psychologically supported by a surprising ally: the high literary works in which he immersed himself, above all Goethe’s. This case study alone may well be a classic example for studying the interaction of science and culture.