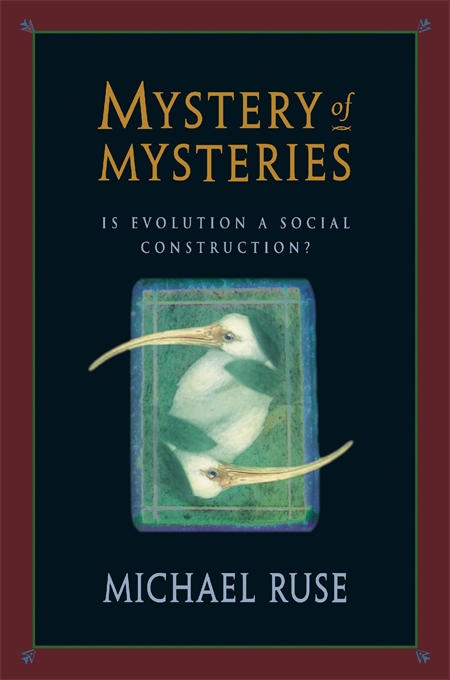 Is Evolution a Social Construction?

With the recent Sokal hoax—the publication of a prominent physicist’s pseudo-article in a leading journal of cultural studies—the status of science moved sharply from debate to dispute. Is science objective, a disinterested reflection of reality, as Karl Popper and his followers believed? Or is it subjective, a social construction, as Thomas Kuhn and his students maintained? Into the fray comes Mystery of Mysteries, an enlightening inquiry into the nature of science, using evolutionary theory as a case study.

Michael Ruse begins with such colorful luminaries as Erasmus Darwin (grandfather of Charles) and Julian Huxley (brother of novelist Aldous and grandson of T. H. Huxley, “Darwin’s bulldog”) and ends with the work of the English game theorist Geoffrey Parker—a microevolutionist who made his mark studying the mating strategies of dung flies—and the American paleontologist Jack Sepkoski, whose computer-generated models reconstruct mass extinctions and other macro events in life’s history. Along the way Ruse considers two great popularizers of evolution, Richard Dawkins and Stephen Jay Gould, as well as two leaders in the field of evolutionary studies, Richard Lewontin and Edward O. Wilson, paying close attention to these figures’ cultural commitments: Gould’s transplanted Germanic idealism, Dawkins’s male-dominated Oxbridge circle, Lewontin’s Jewish background, and Wilson’s southern childhood. Ruse explicates the role of metaphor and metavalues in evolutionary thought and draws significant conclusions about the cultural impregnation of science. Identifying strengths and weaknesses on both sides of the “science wars,” he demonstrates that a resolution of the objective and subjective debate is nonetheless possible.