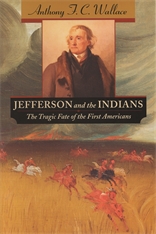 Jefferson and the Indians

The Tragic Fate of the First Americans

In Thomas Jefferson’s time, white Americans were bedeviled by a moral dilemma unyielding to reason and sentiment: what to do about the presence of black slaves and free Indians. That Jefferson himself was caught between his own soaring rhetoric and private behavior toward blacks has long been known. But the tortured duality of his attitude toward Indians is only now being unearthed.

In this landmark history, Anthony Wallace takes us on a tour of discovery to unexplored regions of Jefferson’s mind. There, the bookish Enlightenment scholar—collector of Indian vocabularies, excavator of ancient burial mounds, chronicler of the eloquence of America’s native peoples, and mourner of their tragic fate—sits uncomfortably close to Jefferson the imperialist and architect of Indian removal. Impelled by the necessity of expanding his agrarian republic, he became adept at putting a philosophical gloss on his policy of encroachment, threats of war, and forced land cessions—a policy that led, eventually, to cultural genocide.

In this compelling narrative, we see how Jefferson’s close relationships with frontier fighters and Indian agents, land speculators and intrepid explorers, European travelers, missionary scholars, and the chiefs of many Indian nations all complicated his views of the rights and claims of the first Americans. Lavishly illustrated with scenes and portraits from the period, Jefferson and the Indians adds a troubled dimension to one of the most enigmatic figures of American history, and to one of its most shameful legacies.