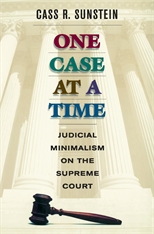 One Case at a Time

Judicial Minimalism on the Supreme Court

Abortion, affirmative action, the “right to die,” pornography and free speech, homosexuality and sex discrimination: as eagerly as the Supreme Court’s rulings on these hot issues are awaited and as intently as they’re studied, they never seem to settle anything once and for all. But something is settled in the process—in the incremental approach—as Cass Sunstein shows us in this instructive book.

One of America’s preeminent constitutional scholars, Sunstein mounts a defense of the most striking characteristic of modern constitutional law: the inclination to decide one case at a time. Examining various controversies, he shows how—and why—the Court has avoided broad rulings on issues from the legitimacy of affirmative action to the “right to die,” and in doing so has fostered rather than foreclosed public debate on these difficult topics. He offers an original perspective on the right of free speech and the many novel questions raised by Congress’s efforts to regulate violent and sexual materials on new media such as the Internet and cable television. And on the relationship between the Constitution and homosexuality and sex discrimination, he reveals how the Court has tried to ensure against second-class citizenship—and the public expression of contempt for anyone—while leaving a degree of flexibility to the political process.

One Case at a Time also lays out, and celebrates, the remarkable constellation of rights—involving both liberty and equality—that now commands a consensus in American law. An authoritative guide to the Supreme Court, the book offers a new understanding of the American Constitution, and of the relationship between democracy and constitutionalism, and between rights and self-government.