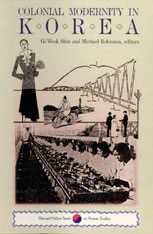 The twelve chapters in this volume seek to overcome the nationalist paradigm of Japanese repression and exploitation versus Korean resistance that has dominated the study of Korea’s colonial period (1910–1945) by adopting a more inclusive, pluralistic approach that stresses the complex relations among colonialism, modernity, and nationalism. By addressing such diverse subjects as the colonial legal system, radio, telecommunications, the rural economy, and industrialization and the formation of industrial labor, one group of essays analyzes how various aspects of modernity emerged in the colonial context and how they were mobilized by the Japanese for colonial domination, with often unexpected results. A second group examines the development of various forms of identity from nation to gender to class, particularly how aspects of colonial modernity facilitated their formation through negotiation, contestation, and redefinition.