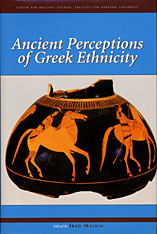 This book is a study of the variable perceptions of Greek collective identity, discussing ancient categories such as blood- and mythically-related primordiality, language, religion, and culture. With less emphasis on dichotomies between Greeks and others, the book considers complex middle grounds of intra-Hellenic perceptions, oppositional identities, and outsiders’ views. Although the authors do not seek to provide a litmus test of Greek identity, they do pay close attention to modern theories of ethnicity, its construction, function, and representation, and assess their applicability to views of Greekness in antiquity.

From the Archaic period through the Roman Empire, archaeological, anthropological, historical, historiographical, rhetorical, artistic, and literary aspects are studied. Regardless of the invented aspects of ethnicity, the book illustrates its force and validity in history.