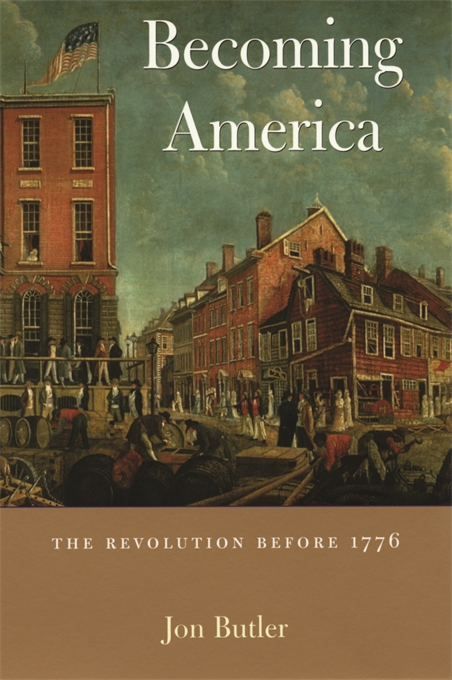 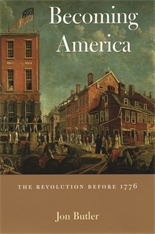 “We must congratulate Butler for [bringing] under control [a] profusion of scholarship and [making] sense of it in fewer than 250 pages. His book is a tour de force… Compelling and readable.”—Gordon S. Wood, The New Republic

“In Becoming America, Jon Butler examines the less examined period of American colonial history from 1680 to 1770 to argue that distinctive traits of modern America were already in place… The book makes a strong case for the early modernity of American society, helps to delineate the evolution of American identity, and serves as a good overview for the period.”—Joel Hodson, American Studies International

“Butler divides his approach to the period into well-studied categories before considering the implications for the Revolutionary era. His chapters on ‘Peoples,’ ‘Economy’ and ‘Politics’ provide a helpful synthesis of recent historiography without the tedious name dropping that characterizes so much historiographical literature… Butler will prompt us all to think more clearly about the structural relationships that evolved during these years.”—John Ritchie Garrison, The Pennsylvania Magazine of History and Biography

“Writing in a deceptively simple style, Butler builds creatively on complex historiographical debates and masterfully synthesizes vast amounts of specialized research, both by himself and by others… Indeed, one of the book’s great virtues is its accessibility, and both its exclusively American focus and its stress on concrete social processes contribute to the clarity and forcefulness of the account. By all reasonable measures, this is a highly successful synthesis that manages to be at once enjoyable and provocative.”—Ruth H. Bloch, William & Mary Quarterly

“In a thoughtful, erudite survey of colonial history, Butler traces the formation of many of America’s modern social characteristics in the crucible of pre-Revolutionary society… Americans today think of the colonial period, if at all, as a time remote from modern America, in which society was unimaginably different from ours. Butler argues persuasively that America during the late colonial period (1680–1776) rapidly developed a variegated culture that displayed distinctive traits of modern America, among them vigorous religious pluralism, bewildering ethnic diversity, tremendous inequalities of wealth, and a materialistic society with pervasively commercial values… A sweeping, well-researched analysis of the transformative changes wrought by immigration, war, and cultural change in colonial America.”—Kirkus Reviews

“The decades in between the Puritan-dominated 17th century and the market-revolutionizing early 19th century were a formative period, [Butler] suggests, during which a distinctly ‘American’ society—and, as Butler would have it, the first ‘modern’ society—developed… Butler’s original analysis is important reading on 18th-century America; he shows that the colonies were developing distinct ways of spending, building, praying, decorating and politicking even then—a cultural revolution that anticipated the political revolution that was to follow.”—Publishers Weekly

“In yet another provocative challenge to the conventional wisdom, Jon Butler argues for the ‘modernity’ of eighteenth-century America. He provides a lively and readable account of how transatlantic commerce, participatory politics, religious pluralism, and ethnic and racial diversity put colonials on the path to ‘becoming Americans’ during the decades before the Revolution.”—Christine Heyrman, author of Southern Cross: The Beginnings of the Bible Belt

“An engrossing, important book. It promises to provoke and inspire. Jon Butler’s Becoming America is an ambitious examination of Britain’s mainland North American colonies between 1680 and 1770. The scope of the book is really quite broad; it covers nearly a century of development across thirteen widely varying colonies, and considers six formidably large aspects of early American life: migration and settlement, politics, economics, religion, the material world, and the origins of the Revolution. Butler’s book revolves around, and advances, a coherent, critical thesis: that ‘the vast social, economic, political, and cultural changes’ of this period created a distinctively ‘American’ society.’ The surprise of the book is that this society was modern; indeed, as Butler claims, it was the world’s ‘first modern society.’ The world Butler portrays in his often vivid, and always highly readable prose is an America of fantastic diversity, an America of many languages, different customs, and dissenting practices of piety. Butler’s Becoming America is a world of bustling politics and economic revolutions.”—Jill Lepore, Boston University

“A terrific book, filled with human interest and the kind of detail that makes abstractions meaningful. A commendable weaving together of themes and materials from political history, social history, and cultural history. Butler offers us a firm foundation for further exploration.”—Laurel Thatcher Ulrich, Harvard University