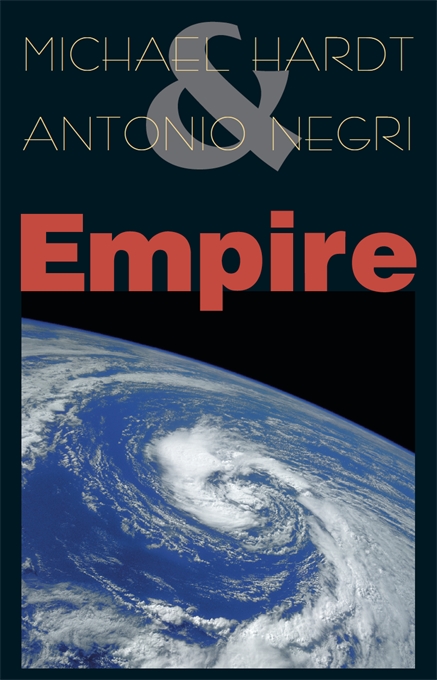 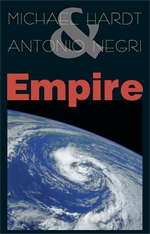 “The appearance of Empire represents a spectacular break. Michael Hardt and Antonio Negri defiantly overturn the verdict that the last two decades have been a time of punitive defeats for the Left… Hardt and Negri open their case by arguing that, although nation-state–based systems of power are rapidly unraveling in the force-fields of world capitalism, globalization cannot be understood as a simple process of deregulating markets. Far from withering away, regulations today proliferate and interlock to form an acephelous supranational order which the authors choose to call ‘Empire’ …Empire bravely upholds the possibility of a utopian manifesto for these times, in which the desire for another world buried or scattered in social experience could find an authentic language and point of concentration.”—Gopal Balakrishnan, New Left Review

“So what does a disquisition on globalization have to offer scholars in crisis? First, there is the book’s broad sweep and range of learning. Spanning nearly 500 pages of densely argued history, philosophy and political theory, it features sections on Imperial Rome, Haitian slave revolts, the American Constitution and the Persian Gulf War, and references to dozens of thinkers like Machiavelli, Spinoza, Hegel, Hobbes, Kant, Marx and Foucault. In short, the book has the formal trappings of a master theory in the old European tradition… [This] book is full of…bravura passages. Whether presenting new concepts—like Empire and multitude—or urging revolution, it brims with confidence in its ideas. Does it have the staying power and broad appeal necessary to become the next master theory? It is too soon to say. But for the moment, Empire is filling a void in the humanities.”—Emily Eakin, New York Times

“Empire…is a bold move away from established doctrine. Hardt and Negri’s insistence that there really is a new world is promulgated with energy and conviction. Especially striking is their renunciation of the tendency of many writers on globalization to focus exclusively on the top, leaving the impression that what happens down below, to ordinary people, follows automatically from what the great powers do.”—Stanley Aronowitz, The Nation

“How often can it happen that a book is swept off the shelves until you can’t find a copy in New York for love nor money? …Empire is a sweeping history of humanist philosophy, Marxism and modernity that propels itself to a grand political conclusion: that we are a creative and enlightened species, and that our history is that of humanity’s progress towards the seizure of power from those who exploit it.”—Ed Vulliamy, The Observer

“Hardt is not just bent on saving the world. He has also been credited with dragging the humanities in American universities out of the doldrums… [Empire] presents a philosophical vision that some have greeted as the ‘next big thing’ in the field of the humanities, with its authors the natural successors of names such as Claude Lévi-Strauss, Jacques Derrida and Michel Foucault.”—Sunday Times

“A sweeping neo-Marxist vision of the coming world order. The authors argue that globalization is not eroding sovereignty but transforming it into a system of diffuse national and supranational institutions—in other words, a new ‘empire’…[that] encompasses all of modern life.”—Foreign Affairs

“Globalization’s positive side is, intriguingly, a message of a hot new book. Since it was published last year, Empire…has been translated into four new languages, with six more on the way… It is selling briskly on Amazon.com and is impossible to find in Manhattan bookstores. For 413 pages of dense political philosophy—whose compass ranges from body piercing to Machiavelli—that’s impressive.”—Michael Elliott, Time

“Hailed as the new Communist Manifesto on its dust jacket, this hefty tome may be worthy of such distinction… Hardt and Negri analyze the multiple processes of globalization…and argue that the new sovereign, the new order of the globalized world, is a decentered and deterritorializing apparatus of rule… Though Empire ties together diverse strands of often opaque structuralist and poststructuralist theory…the writing is surprisingly clear, accessible, and engaging… Hardt and Negri write to communicate beyond the claustrophobic redoubts of the academy… In short, Empire is a comprehensive and exciting analysis of the now reified concept of globalization, offering a lucid understanding of the political–economic quagmire of our present and a glimpse into the possible worlds beyond it.”—Tom Roach, Cultural Critique

“In their recent book Empire—a highly explosive analysis of globalisation—[the authors] take the effort to develop a full narrative of this new world order, of the global postmodern sovereignty and its counter-currents. It is therefore not so much a book on hybridity only, but rather an attempt to reformulate and redefine the political under conditions of globalisation. The result is a resolute tour de force delineating the genealogy of the postmodern regime as well as its consolidation as a new ‘society of control’ under conditions of world-wide ‘real subsumption’ which creates one smooth, global capitalist terrain.”—Dirk Wiemann, Journal for the Study of British Cultures

“One of the rare benefits to the credit [of the contemporary Empire] is to have undermined the ramparts of the nation, ethnicity, race, and peoples by multiplying the instances of contact and hybridization. Perhaps, at least this is the hope forwarded by these two Marx and Engels of the internet age, it has thus made possible the coming of new forms of transnational solidarity that will defeat Empire.”—Aude Lancelin, Le Nouvel Observateur

“This sprawling book is filled with original ideas and analyses, including some well-aimed critiques of postmodernism, dependency theory, world systems theory, anti-imperialism, and localism—and there is much more besides to stimulate the reader… This is an exciting and provocative book whose depth and richness can only be hinted at in so brief a review.”—Frank Ninkovich, Political Science Quarterly

“Michael Hardt and Antonio Negri’s Empire, by contrast, owes its density not to affected language—indeed, its manifesto-like communicative urgency is one of its greatest strengths—but to the exhilarating novelty of what it has to say… This is as simple, as apparently innocent, and as radically counter-intuitive when thought to its limit as the Sartrean dictum that existence precedes essence must have been in its time. It’s not that this relation had never been thought before; the connection between the demands of labor unions and the development of the automated factory is well-known. But in Hardt and Negri’s hands this relation becomes a powerful new way to theorize globalization and the development of capital itself… Hardt and Negri perform the urgent task of reclaiming Utopia for the multitude.”—Nicholas Brown, Symploke

“Stretching back nearly twenty years, Antonio Negri’s work has been until recently one of the best-kept secrets of Marxist theory in the United States… [Empire] is the culmination of Negri’s lifework and a major contribution to Marx’s uncompleted work on capitalism’s international phase. Beyond its inherent scholarly merit, however, Empire provides a critical tool for understanding what the events following September 11th mean as history and politics.”—Curtis White, Bookforum

“Hardt, an assistant professor of literature and a political scientist (and currently a prison inmate), has produced one of the most comprehensive theoretical efforts to understand globalization.”—Choice

“Michael Hardt and Tony Negri have given us an original, suggestive and provocative assessment of the international economic and political moment we have entered. Abandoning many of the propositions of conventional Marxism such as imperialism, the centrality of the national contexts of social struggle and a cardboard notion of the working class, the authors nonetheless show the salience of the Marxist framework as a tool of explanation. This book is bound to stimulate a new debate about globalization and the possibilities for social transformation in the 21st century.”—Stanley Aronowitz, author of False Promises: The Shaping of American Working Class Consciousness

“The new book by Antonio Negri and Michael Hardt, Empire, is an amazing tour de force. Written with communicative enthusiasm, extensive historical knowledge, systematic organization, it basically combines a kojevian notion of global market as post-history (in this sense akin to Fukuyama’s eschatology) with a foucauldian and deleuzian notion of bio-politics (in this sense crossing the road of a Sloterdijk who also poses the question of a coming techniques of the production of the human species). But it clearly outbids its rivals in philosophical skill. And, above all, it reverses their grim prospects of political stagnation or the return to zoology. By identifying the new advances of technology and the division of labor that underlies the globalization of the market and the corresponding de-centered structure of sovereignty with a deep structure of power located within the multitude’s intellectual and affective corporeity, it seeks to identify the indestructible sources of resistance and constitution that frame our future. It claims to lay the foundations for a teleology of class struggles and militancy even more substantially ‘communist’ than the classical Marxist one. This will no doubt trigger a lasting and passionate discussion among philosophers, political scientists and socialists. Whatever their conclusions, the benefits will be enormous for intelligence.”—Etienne Balibar, author of Spinoza and Politics

“Empire is one of the most brilliant, erudite, and yet incisively political interpretations available to date of the phenomenon called ‘globalization.’ Engaging critically with postcolonial and postmodern theories, and mindful throughout of the plural histories of modernity and capitalism, Hardt and Negri rework Marxism to develop a vision of politics that is both original and timely. This very impressive book will be debated and discussed for a long time.”—Dipesh Chakrabarty, author of Provincializing Europe

“Empire is a stunningly original attempt to come to grips with the cultural, political, and economic transformations of the contemporary world. While refusing to ignore history, Hardt and Negri question the adequacy of existing theoretical categories, and offer new concepts for approaching the practices and regimes of power of the emergent world order. Whether one agrees with it or not, it is an all too rare effort to engage with the most basic and pressing questions facing political intellectuals today.”—Lawrence Grossberg, author of We Gotta Get Out of This Place: Popular Conservatism and Postmodern Culture

“An extraordinary book, with enormous intellectual depth and a keen sense of the history-making transformation that is beginning to take shape—a new system of rule Hardt and Negri name Empire imperialism.”—Saskia Sassen, author of Losing Control? Sovereignty in an Age of Globalization

“By way of Spinoza, Wittgenstein, Marx, the Vietnam War, and even Bill Gates, Empire offers an irresistible, iconoclastic analysis of the ‘globalized’ world. Revolutionary, even visionary, Empire identifies the imminent new power of the multitude to free themselves from capitalist bondage.”—Leslie Marmon Silko, author of Almanac of the Dead

“After reading Empire, one cannot escape the impression that if this book were not written, it would have to be invented. What Hardt and Negri offer is nothing less than a rewriting of The Communist Manifesto for our time: Empire conclusively demonstrates how global capitalism generates antagonisms that will finally explode its form. This book rings the death-bell not only for the complacent liberal advocates of the ‘end of history,’ but also for pseudo-radical Cultural Studies which avoid the full confrontation with today’s capitalism.”—Slavoj Žižek, author of The Ticklish Subject: The Absent Center of Political Ontology