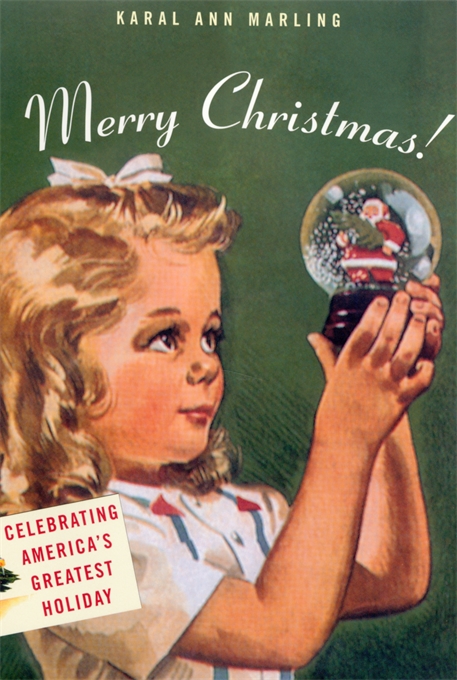 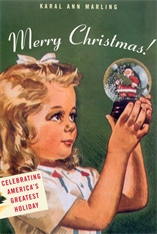 “Marling…[is] a keen-eyed critic of American popular culture… Merry Christmas! is an inspired idea of the sort that academics seldom have: consider the obvious, because no one else has, and treat it with respect. Marling’s chapter topics read like a classic ‘What to Do for Christmas’ list—the tree, Santa, wrapping paper, shopping, cards and gifts, cookies and decorations. She also throws in movies, music and advertising. Showing the zeal of an archaeologist, Marling has dug through magazines and newspapers, photograph files, shoeboxes full of old cards, records of department-store windows and parades, and every possible kind of ephemera. The result is a collection of unrecorded histories, the visual and material culture of the American Christmas holiday… Combining imagination with solid historical grounding, Marling’s analysis is both erudite and delightful… For all her scholarship and research, Marling is still tuned directly into [our] primary needs to right the wrongs of Christmas Past. She understands our national effort to keep trying to get it right next time… Reading her intelligent and entertaining book just might be a way to get through that familiar mixture of joy and dread that hits…when the Santas and the holly berries first appear in our land.”—Jeanine Basinger, The New York Times Book Review

“Marling deserves credit, and perhaps even a measure of gratitude, for bringing together in one book a vast amount of information about American Christmases past and how they evolved into Christmas as we know it today… Give Marling credit, too, for being unsentimental about the true nature of the American Christmas. By contrast with innumerable others who have complained, over the years, that a pure religious holiday has been ‘corrupted’ and ‘commercialized’ by the American marketplace… Marling notes at the outset that ‘the American Christmas has always been more secular than sacred.’”—Jonathan Yardley, The Washington Post Book World

“This book may be the definitive study of secular Christmas traditions in the United States. Though she acknowledges the genuine glow of family and religion in Christian observances, Marling…makes it clear that her story centers on the materialism of Christmas.”—Norman Anderson, The Christian Science Monitor

“Could there be just a tiny clove of Grinchly garlic in our author’s soul? Yes, as there is in yours and mine. Every virtue needs its vice, every Christmas its moody kitchen moments, embarrassment of riches, and stack of disingenuous greeting cards… While Marling is carefully unwrapping the facts of this ‘more secular than sacred’ holiday in America, she looks up to remind us that there is jaw-dropping delight to be plucked from the package.”—Holly Finn, Financial Times

“An unexpected trill of a book… Merry Christmas! Celebrating America’s Greatest Holiday is jammed with fabulous facts about toy villages, holiday lights, wrapping papers, window shopping, gifts, stocking stuffers, cards and just about every other external something historically associated with Christmas. And maybe all that doesn’t suggest a provocative, memorable narrative, but once one cracks Merry Christmas! open and starts to read, one discovers that Marling has turned the trappings of Christmas into a story all their own, shooting the whole thing through with such drama, sizzle and charm that it takes off like fable, like something her readers will find themselves inspired to repeat while stuffing stockings or stoking fires or settling down to Christmas turkeys… Marling’s infectious enthusiasm for the stuff of Christmas helps to fill the many hollows of our shallow consumer culture—reasserts the beauty of boxes and trim, stuffing and stuffers, glitter and glass, and gives a lovely, historic glamour to it all.”—Beth Kephart, The Baltimore Sun

“Cultural historian Karal Ann Marling traces the history of our modern Christmas in the zestful, often endearingly gabby Merry Christmas! It is, like the holiday itself, a story of American families and business, stuffed like a red stocking with glittery details, vivid episodes, and eccentric side-trips.”—Scott Alarik, The Boston Globe

“In nine chapters, Marling dissects the holiday, its history, meanings and practices ranging from wrapping paper to the rampant mythology of merrie olde Englyshe celebrations (Victorian, actually), window shopping, The Tree and the enduring allure of a ‘White Christmas.’ Her postscript is ‘A Meditation on Christmas Cookies’… [Merry Christmas!] is lively reading and apt to chase the holiday blues.”—Glenn Giffin, The Denver Post

“[Marling] is an extremely adept cultural critic who dives below the wrapping paper and blinking lights to examine America’s central, overwhelming holiday… Viewing Christmas mainly through the media of mass culture, Marling examines engravings, news photos, fiction, and greeting cards and paints a compelling portrait of how Christmas has been presented and shared. She shows that although the holiday is often associated with material gain, often there’s genuine goodwill, warmth, and familial tenderness behind the glitzy trappings… No Scrooge herself, the author is usually cheery and loving in her discussions, balancing articulation and intelligence with a wry, casual tone that would make her a wonderful head of the table at any Christmas dinner.”—Elizabeth Millard, ForeWord Magazine

“According to Karal Ann Marling, ‘Christmas is the universal memory’ for contemporary Americans (whether they’re Christian or not), an event in which ‘virtually everybody has played a part.’ By telling the story of Americans’ celebration of Christmas, she promises to uncover a surprisingly neglected piece of not only our national past, but our collective wishes and psyche… Marling has a keen eye for offbeat topics, arresting detail and original interpretation… Her goal is to unwrap the hidden meaning of quotidian, but telling, objects and practices to reveal the holiday’s deeper significance.”—Chris Rasmussen, In These Times

“For those interested in the evolution of Christmas and its traditions over the past two centuries, Merry Christmas! by Karal Ann Marling is an absolute must. With excruciating attention to detail and impeccable research, this book covers a broad survey of what makes Christmas the ‘universal memory.’ Yet this is not some academic treatise. It is readable, engrossing and literate—high praise for any book… Marling thematically develops her subject and does it justice…Take a breather, absorb the extent of Marling’s treatment and go bake some cookies.”—Gerald Toner, The Louisville Courier-Journal

“Marling sets out to define the ways in which we have turned to things to define Christmas. It is not, thank God, an anti-materialist rant… Marling’s book is a celebration of plenty, which needn’t mean self-satisfied or vulgar. She’s an authentic American author—one who loves stuff and puts it lovingly in its place.”—Charles Taylor, Newsday

“Author Karal Ann Marling describes the provenance and significance of the decorated trees and holiday lights, the cards and gifts and wrapping papers, the toy villages and store displays and Macy’s holiday parade, Bing Crosby and Santa Claus. Viewing Christmas through engravings and lithographs, magazine fiction, pictorial ads, news photos, cards and movies, Marling describes how the Christmas tree grew out of a much reprinted image of Queen Victoria and her family gathered around a decorated fir; how Santa Claus lost his provincial Dutch character and turned into the holly old soul we know; how Charles Dickens’s A Christmas Carol borrowed from Washington Irving’s imaginings of what Christmas must have been like in Merrie Olde England; and how the holiday, balancing between the private and public realms, conferred a central and defining role on women.”—Earl W. Count, The Omaha World-Herald

“Like a parent faced with a holiday toy in 100 pieces and a sheet of instructions in faulty English, Karal Ann Marling, in Merry Christmas! Celebrating America’s Greatest Holiday, has deconstructed the holiday and reassembled it in interesting and unexpected ways… [It] is a book full of surprises… By cleverly taking apart and analyzing our modern holiday customs, Marling tells us a lot about who we are.”—Jarrett Smith, The Star-Tribune [Minneapolis, MN]

“Like an agreeably stuffed literary Christmas stocking, Marling’s entertaining history of how Christmas became America’s top holiday is generously filled with interesting facts, anecdotes, and period illustrations… Lively and informative… [Marling] describes how Santa became a national icon; the changing attitudes toward giving to the poor; the origin and growth of Christmas cards; and the impact of popular Christmas songs, movies, and television broadcasts… A special holiday treat to be savored while nibbling Christmas cookies and admiring the well-dressed tree.”—Kirkus Reviews

“Imaginatively researched and strewn with surprising details, this engaging cultural history traces the rise of the consumerism that has become as integral to the celebration of Christmas in the United States as tinsel is to tree trimming… With a keen eye for cultural diversity…and a ready sense of irony, she pierces the sentimental myths surrounding this cultural institution.”—Publishers Weekly

“This book is a thoroughly engaging and eye-opening tale of how a religious celebration came to be secularized and, more important, nationalized in the United States. Discerning in her choice of examples, gymnastic in her leaps from subject to subject, Marling here demonstrates again her fine interdisciplinary skills. Moreover, she does so in a style mercifully free of cant and academic jargon. Marling has filled the Christmas stocking with a winning combination of detail and interpretation, and has made the season merrier for it.”—Charles C. Eldredge, author of Georgia O’Keeffe and former director of the National Museum of American Art, Smithsonian Institution

“Karal Ann Marling’s books are growing into a formidable history of American everyday life and culture. In Merry Christmas! she delves into the history and social significance of Christmas trappings, such as Christmas decorations, Christmas dinner, Christmas presents, and Christmas trees, which most people take for granted, assuming, perhaps, that such apparently timeless things have ‘no history.’ Marling is at her best when discussing post-Second World War Christmas celebrations: the relatively recent contributions of ‘Christmasy’ things like Bing Crosby’s ‘White Christmas,’ Elvis Presley’s ‘Blue Christmas,’ and the ubiquitous Christmas TV specials, reminding us that Christmas is a living, evolving celebration, which did not stop with Charles Dickens’ ‘A Christmas Carol.’”—Derham Groves, University of Melbourne, author of Mail Art

“What makes this book valuable for historians, whether or not they have a special interest in Christmas, is that the analysis of Christmas is unfailingly put into the broad context of social mores that have defined American popular life, most notably the roles of women and children—topics either neglected in historical analysis or segregated from traditional history. Christmas is the biggest of American holidays; and, therefore, to understand its meaning is to understand significant aspects of America’s character at home as well as in the marketplace. Marling’s analysis of material things is particularly strong because it focuses so rigorously on connotation and significance, thus making the point that material culture is a reflection of prevailing political, social, and spiritual values.”—Michael Stern, coauthor of Roadfood, Goodfood and Elvis World