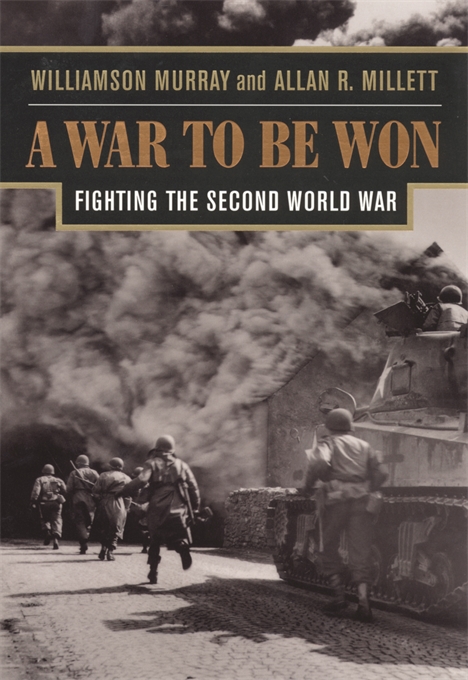 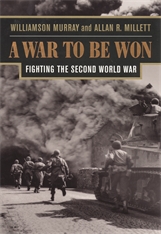 A War To Be Won

“The West’s eventual triumph is the subject of A War To Be Won, a comprehensive and highly readable history by two eminent and prolific military historians. Williamson Murray and Allan Millet focus on operations but range far and wide into politics, strategy, military doctrines (why armies fight the way they do), weapons, science and tactics, from the bumbling politics of the ’30s to the Cold War… This is edgy, though expert, history. The ordeal of the Soviet war against Germany is dramatically and vividly told, as is the pillage and rape that Red Army soldiers inflicted on prisoners and civilians within reach.”—Robert Killebrew, The Washington Post

“In A War To Be Won: Fighting the Second World War, Williamson Murray and Allan Millett have…eschewed grand strategy for what they describe as operational history. They have plugged a large gap… They combine firm and fresh judgments with common humanity; and they achieve balance not only between the theaters of war but also between themselves. Murray knows about Germany, Britain and air power, Millett about the United States and its armed forces. If they divided their subject matter accordingly, the seams are never evident. This is an outstanding history of the war.”—Hew Strachan, The Times Literary Supplement

“While…several volumes present admirably comprehensive panoramas of the second world war, the very nature of this approach precludes close operational analysis as opposed to general operational narrative. This is the gap that A War To Be Won fills—an operational history of the 1939–1945 war focusing on military operations, with dispassionate discussion of military effectiveness whether involving the Allies or the Axis… A War To Be Won, confined within a single volume, is a remarkable achievement deserving of the many plaudits it has received. It has a narrative deftness that will attract the general reader, operational analysis incisive and original enough to engage the specialist, technical evaluation and tactical appraisal of military effectiveness in abundance, though not without controversial, even acerbic comment where appropriate.”—John Erickson, The Times Higher Education Supplement

“The best synthesis of all of [the] new scholarship on WWII is, in my opinion, Williamson Murray and Allan Millett’s superb comprehensive history of the war… There are a number of rather surprising assessments of individual commanders in the war… Anyone interested in this deadliest of all wars should consult this marvelous book.”—Louis Ray Sadler, Albuquerque Journal

“An outstanding single-volume history of [a] central moment… [The authors] write in a brisk, confident and knowledgeable style, often sprinkling their analyses with pithy irony, sardonic wit and sharp insights… Murray and Millett have produced a magnificent volume, one that will fascinate and enlighten both expert and layman alike. A War To Be Won now takes its place as the core volume in any library on the history of the Second World War, and it will likely remain so for years to come.”—Calvin L. Christman, The Dallas Morning News

“Military historians Williamson Murray and Allan R. Millett dissect tactics and operations of the war’s major players in A War To Be Won… Unlike other volumes on WWII, many of which examine the soldiers’ day-to-day life in the trenches, A War To Be Won focuses on the overall picture, the strategic successes and failures of the warring nations.”—Dick Kreck, The Denver Post

“Most recent single-volume histories of the Second World War have been disappointing. It is a Herculean task to cover such a vast canvas of time and space. Authors wilt visibly under the strain. Here, however, is a work of exceptional quality from two distinguished American military historians… This book makes an important contribution to understanding both the military context and the nature of this vast global conflict.”—Max Hastings, The Evening Standard

“A magisterial, hypnotically detailed tactical narrative of WWII, with competing military, political, and social histories of the maelstrom writ large—yet comprehensibly presented… Coauthors Murray and Millett spent decades on their research, and the result is an essential plurality of understanding that allows them to consider the military strategies (and underlying realities) of the various Allied and Axis nations. Intentionally or otherwise, this book covers ground distinct from Stephen Ambrose’s popular books, in that they focus much less on the personalized experiences of the soldier and more on the significant strategies, decisions, and movements of governments and generals (and the corresponding actions of the many individual naval, combat, and bomber units, and sundry partisan and espionage triumphs) that taken together, form the artificial patchwork of industrialized devastation we think of as the war. Surprisingly, this ‘globalized’ perspective does produce abstract or diffuse results, but allows the authors to present a nuanced panorama of scarce information and unique interpretation… Strongly written with the stern clarity of senior historians, this is a spellbinding history: the reader will hear the whine of the bombers and see the guttering lights of Europe, and find this rich assemblage of horror and destiny hard to set down.”—Kirkus Reviews

“Two highly accomplished historians…collaborated to produce this magnificent one-volume history of World War II. While they do not neglect political or economic factors, what truly sets this work apart is their focus on ‘the conduct of operations by the military organizations that waged the war.’ …This is a riveting book that stimulates as much as it informs—and is a must read for any student of World War II or military professional.”—Richard B. Frank, Naval History

“[Murray and Millett] are military historians but take an extraordinarily broad view of the conflict [of World War II]—its political and economic origins, its diplomatic maneuvering, its strategic designs and its human toll, but above all its combat. In 600-plus pages, they zero in on the troops who did the fighting and the commanders who led—and sometimes misled—them… The writing is brisk and lively, the revelations sometimes startling, and the selection of photographs generous and revealing. This is as masterful and readable a one-volume history of the Second World War as anyone is likely to write.”—Herbert Kupferberg, Parade Magazine

“It is the most complete, balanced, and well-informed history of military operations now available.”—James J. Sheehan, Political Science Quarterly

“Scholarship and insight place this book in the front rank of military history written in the 20th century’s final decade. The authors…make no secret of their convictions on personal, institutional and operational issues, but are nevertheless remarkably successful at avoiding the armchair debunking that mars so many histories of the period.”—Publishers Weekly

“World War II is fast slipping from memory. So it takes a book, such as A War To Be Won…to make one realize the horror of that conflict… In this comprehensive history of the military aspect of World War II…[the authors] provide a broad view of the two-hemisphere tragedy.”—Fred Slater, The St. Joseph News-Press

“Without question A War To Be Won is the most compelling single-volume history of the Second World War ever written. Murray and Millett are superb historians imbued with a trenchant gift for analysis, detachment, and synthesis. A noble, grand, and sweeping achievement.”—Douglas Brinkley, Director, The Eisenhower Center, University of New Orleans

“An excellent history of the Second World War, which offers a new and deeply illuminating view of why the major operations were launched and of the effectiveness with which they were conducted. The story is enriched by an original analysis of the ideas, ideological aims, technology, social consequences and international impact of the most intense conflict that the world has seen. A comprehensive, well-founded and enlightening single volume history.”—Robert O’Neill, Chichele Professor of the History of War, All Souls College, Oxford

“Thousands of books have been published about World War II, but very few have possessed he level of scholarly perspective, encompassing scale and insightful detail to be found in this one. With its penetrating view of operational strategy on all sides during the war, it is among the finest of WWII studies and the best one-volume account of the military conflict I’ve ever read.”—William W. Starr, Columbia State

“Murray and Millett have done an enormous service by providing a wonderful, one-volume history of the fighting of World War II. Those of us who fought the war must applaud them. It is a book for everyone, not just for the military history buff. I plan to tell my grandchildren that to understand World War II, the defining event of the Twentieth Century, and the generation that fought it, they must read this book.”—General John W. Vessey, U.S. Army (Ret.) and former Chairman of the Joint Chiefs of Staff

“Amid the immense literature on the Second World War, it is remarkable that one niche has not hitherto been filled: a one-volume history focusing on military operations. This book remedies that omission and does so superbly, with accuracy and interpretive flair. There is nothing else quite like it.”—Russell F. Weigley, author of The American Way of War: A History of United States Military Strategy and Policy