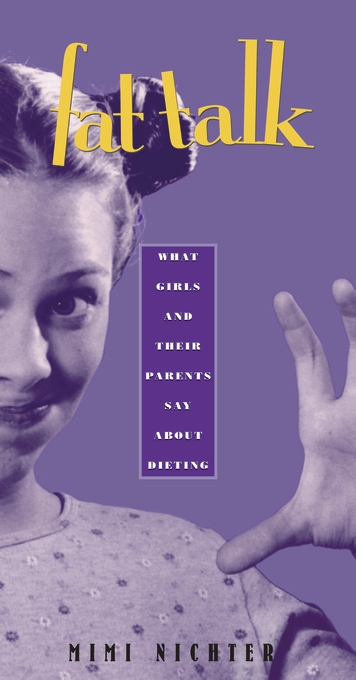 What Girls and Their Parents Say about Dieting

Teen-aged girls hate their bodies and diet obsessively, or so we hear. News stories and reports of survey research often claim that as many as three girls in five are on a diet at any given time, and they grimly suggest that many are “at risk” for eating disorders. But how much can we believe these frightening stories? What do teenagers mean when they say they are dieting?

Anthropologist Mimi Nichter spent three years interviewing middle school and high school girls—lower-middle to middle class, white, black, and Latina—about their feelings concerning appearance, their eating habits, and dieting. In Fat Talk, she tells us what the girls told her, and explores the influence of peers, family, and the media on girls’ sense of self. Letting girls speak for themselves, she gives us the human side of survey statistics.

Most of the white girls in her study disliked something about their bodies and knew all too well that they did not look like the envied, hated “perfect girl.” But they did not diet so much as talk about dieting. Nichter wryly argues—in fact some of the girls as much as tell her—that “fat talk” is a kind of social ritual among friends, a way of being, or creating solidarity. It allows the girls to show that they are concerned about their weight, but it lessens the urgency to do anything about it, other than diet from breakfast to lunch. Nichter concludes that if anything, girls are watching their weight and what they eat, as well as trying to get some exercise and eat “healthfully” in a way that sounds much less disturbing than stories about the epidemic of eating disorders among American girls.

Black girls, Nichter learned, escape the weight obsession and the “fat talk” that is so pervasive among white girls. The African-American girls she talked with were much more satisfied with their bodies than were the white girls. For them, beauty was a matter of projecting attitude (“’tude”) and moving with confidence and style.

Fat Talk takes the reader into the lives of girls as daughters, providing insights into how parents talk to their teenagers about their changing bodies. The black girls admired their mothers’ strength; the white girls described their mothers’ own “fat talk,” their fathers’ uncomfortable teasing, and the way they and their mothers sometimes dieted together to escape the family “curse”—flabby thighs, ample hips. Moving beyond negative stereotypes of mother–daughter relationships, Nichter sensitively examines the issues and struggles that mothers face in bringing up their daughters, particularly in relation to body image, and considers how they can help their daughters move beyond rigid and stereotyped images of ideal beauty.