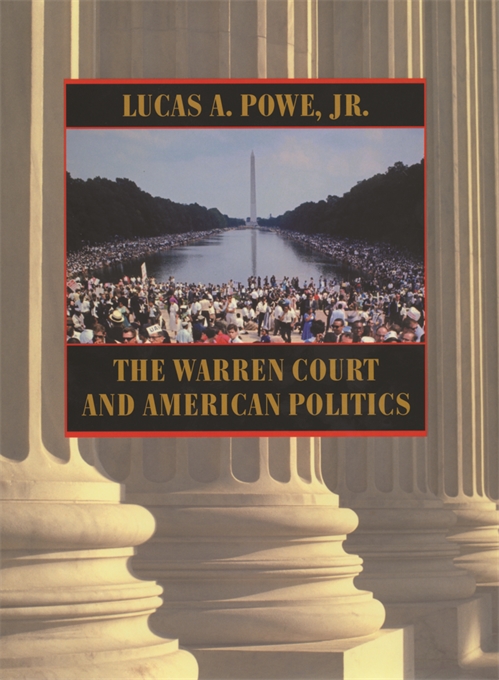 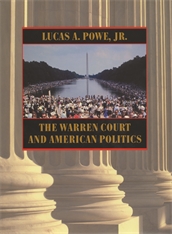 The Warren Court and American Politics

“An intriguing…history of the path-breaking, even revolutionary, court under Chief Justice Earl Warren in the 1950s and 1960s. Rarely for a constitutional scholar, Powe places the Warren court’s most famous cases in their political context…[in] a colorful tale. The liberal Warren court’s decisions on race, crime, religion, free speech and obscenity startled, delighted or outraged contemporaries and had a far-reaching impact on American politics and society.”—The Economist

“In an important book, Lucas A. Powe, Jr. argues that the familiar debate about the merits of the Warren Court is, in fact, wrong. Far from being a group of liberal judicial activists who imposed their views on an unwilling nation, Powe argues, the Warren Court was, for much of its tenure, remarkably deferential to the political branches… Powe persuasively argues that the most important decision of…[the Warren Court] can be justified as an effort to unclog, rather than to thwart, the expression of majority will.”—Jeffrey Rosen, The New Republic

“Mr. Powe describes himself as someone who ‘worshipped’ the Warren Court. Even so, he portrays it impartially as the super-legislature it often resembled—an outcome-directed body that rarely worried about constitutional theory or precedent… The court set into motion a philosophy of political activism—heedless of constitutional doctrine—that has become, for many judges ever since, almost a way of life. This cannot be a good thing, however much we might applaud some of the Warren court’s rulings or the good intentions that lay behind them. Admirably, especially for someone still enthralled by the Warren Court, Mr. Powe seems to recognize this.”—Jay P. Lefkowitz, The Wall Street Journal

“Purely legal analysis emphasizes the logical links, or absence of them, between the questions raised in two or more cases and the answers given to them. Purely political analysis relies on social history as an explanation for judicial decisions. A more complete picture results, as Powe argues, from a combination of the two… Powe has done his non-psychological homework, however, and he presents new material resulting from research about Brennan, Tom Clark, and Douglas…he suggests that the Court ‘was not worrying about Constitutional theory but rather reaching results that conformed to the values that enjoyed significant national support in the mid-1960s.’ His well-researched and lively volume presents strong evidence that he is correct.”—Philippa Strum, Journal of American History

“[Powe’s] book would be of considerable interest to students of the judiciary even if its sole virtue were the deftness with which Powe organizes and analyzes the unusually large number of important decisions that the Supreme Court rendered during the controversial tenure of Chief Justice Earl Warren. In this respect, Powe is deserving of comparison to such eminent chroniclers of the Court’s history as Henry Abraham, Alfred Kelly, and Winfred Harbison. The book’s purpose, however, is as ambitious as its scope… A comprehensive (and accessible) history of the Warren Court.”—Jeffrey D. Hockett, Jurist: Books-on-Law

“Challenging the reigning consensus that the Warren Court fundamentally protected minorities, this book examines the Supreme Court in a wider political environment. Powe argues that the Court was a functioning partner in Kennedy–Johnson liberalism and thus helped impose national liberal-elite values on groups that were outliers to that tradition.”—Law and Social Inquiry

“The Warren Court and American Politics is a spectacularly good book. Written for an audience of educated non-lawyers, it provides the best available account of the relationship between the Warren Court’s liberalism and American politics during the entire period of Earl Warren’s tenure… It retrieves the nearly forgotten period of stalemate. Its argument that the South must be seen at the center of the Warren Court’s work in free speech, religion, and criminal procedure illuminates the Court’s enterprise better than any other account of which I am aware.”—Mark V. Tushnet, Texas Law Review

“Finally we have a comprehensive, readable, and clear-headed history of the Warren Court. This book is not only essential but absolutely required reading for everyone interested in American constitutional history, politics, and law.”—Stephen M. Griffin, Tulane Law School

“Writing accessibly, and often irreverently, Powe locates the Warren Court within the major political movements of the era and convincingly refutes the notion that the Court was a forum of principle that ignored the political world outside its marble palace. Although there will undoubtedly be other treatments of the Court, Powe’s ambitious and comprehensive survey establishes a very high threshold for any future historians to meet.”—Sanford Levinson, author of Written in Stone: Public Monuments in Changing Societies

“Professor Powe has written a masterful book, the best on the Supreme Court in a generation. Not only will it be seen as a definitive account of the Warren Court, but it will also be viewed as a seminal work on the U.S. Supreme Court. With this work, Powe stakes a powerful claim to be seen as the heir to Robert McCloskey. Powe has written in the best tradition of works at the intersection of law, political science, and history. Decision making in the Supreme Court depends on law, attitudes, personalities, contexts, and sometimes fortune. This book demonstrates this in a way that will seem exactly right to most students of the Court. Not since Walter Murphy’s classic Elements of Judicial Strategy have we had a book that does this so elegantly and persuasively.”—H. W. Perry, author of Deciding to Decide: Agenda Setting in the United States Supreme Court

“Powe has revived an honorable genre—the study of the Supreme Court as a political institution—a field once graced by the likes of E.S. Corwin, Alpheus Mason, and Walter Murphy. Powe reminds us that the Court is a political institution, one of three branches of government, and as such can only be understood in the larger context of American politics. The book is a tour de force, brimming with insights and elegantly written. He reminds us all of what political science once was, and what it could be again.”—Melvin I. Urofsky, Virginia Commonwealth University

“This book makes an important contribution to our understanding of the Warren Court. Numerous scholars have asserted that Earl Warren and his fellow justices were deeply involved in politics and mindful of changing political currents, but L. A. Powe is the first to have demonstrated detailed connections between the legal opinions issued by Warren Court justices and contemporaneous political arguments made by members of Congress and the Executive branches. The Warren Court and American Politics represents a skillful blending of the techniques and concerns of legal scholars and political scientists, combined in a lively, at times riveting, narrative.”—G. Edward White, University of Virginia School of Law

“Professor Powe, demonstrating total control of the legal and historical materials, illuminates how the Warren Court was deeply embedded in the culture and politics of its time, particularly the Kennedy–Johnson liberalism of the mid and late 1960s. In doing so, he has resuscitated a neglected and valuable tradition of the institutional analysis of public law and given us a deeper understanding of what lies ahead for America in the new millennium.”—Mark Yudof, University of Minnesota